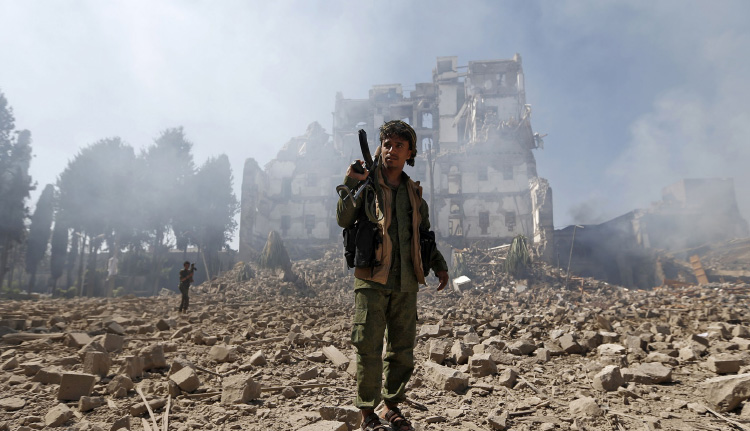 The war in Yemen outbroke seven years ago raising questions on the region’s future oil and gas industry especially with the involvements of the region’s biggest oil-producing powers; Saudi Arabia, United Arab Emirates (UAE), and Iran. The tension between the Houthi rebels and the internationally recognized government of President Abed Rabbo Mansour Hadi started in 2014 has led to the collapse of the ruling regime and the beginning of the war that devastated the lives of millions of Yemenis. The conflict has even expanded to affect oil fields in Saudi Arabia and UAE and threaten the stability of oil and gas markets.

How It All Began

The conflict that has caused 233,000 deaths, as reported by the BBC, has appeared after the former President Alli Abdullah Saleh handed over power to his deputy Abdrabbuh Mansour Hadi in 2011. With the instability in the country, the Houthis, formally known as Ansar Allah, seized control of Saada province and marched southwards. In 2015, the Houthi rebels took over the capital Sanaa forcing the president to flee the country.

The Houthis are a Zaydi Shiite Muslim minority movement that is supported by Iran. Yemen, which lies on the southern end of the Arabian Peninsula, shares its northern border with Saudi Arabia. The threat of insecure borders along with the risk of raising Iran’s influence in the region has led Saudi-Arabia to form an alliance with UAE and seven Arab countries. They have led airstrikes to support Hadi’s government.

Moreover, Yemen also overlooks Bab el-Mandeb Strait which connects the Gulf of Aden to the Red Sea and western Saudi Arabia. The presence of such a conflict and an increasing Iranian influence near this focal area is also posing a threat to the strategic oil and gas route to the Suez Canal. The possible control of the Houthis and, subsequently, Iran over that advantageous strait drove Saudi-Arabia and UAE to interfere to secure their oil and gas trade.

The Saudi coalition accused Iran of supporting the Houthis with ballistic missiles and other sophisticated weapons which Iran has denied any knowledge of. The troops of Saudi Arabia and UAE helped the Yemeni government to work from Aden. The alliance continued to support Hadi’s government until UAE backed its troops in 2019. However, the UAE government is still involved in this war by training the Yemeni troops. Saudi Arabia still helps the government in Yemen to secure its own borders.

The Effects on Oil and Gas

As oil and gas industry is the backbone of the involved countries’ economies. Oil and gas reserves and infrastructure were the favored targets for Houthis.

Yemen meanwhile has 3 billion barrels of oil reserves and 17 trillion cubic feet of natural gas which are not developed due to the war. The Houthi forces also struggled to maintain power over Marib, the oil-rich province.

The Effects of the Conflict on Saudi Arabia

As Saudi Arabia is the largest exporter of crude oil and pumps around 10% of the petroleum consumed globally, the Houthis opted to strike the kingdom’s most valuable asset. The Washington-based think tank Center for Strategic and International Studies announced that “Houthi attacks upon Saudi Arabia more than doubled for the first nine months of 2021 compared to the same period a year earlier.” Although not all of these attacks are on oil infrastructure, and not all of them have the exact precision, they can affect oil prices. In fact, the international benchmark Brent jumped by more than 60% over the last year and such attacks can be even more disturbing to oil markets.

In May 2019, the Houthis attacked the Saudi Aramco pipeline which caused a temporary price spike of around $2 per barrel. Similarly, the Houthis’ attack on Saudi Arabia’s Abqaiq and Khurais oil processing plants was responsible for the rise of the Brent 13% to be $68 per barrel which returned to $60 a barrel a few days after the attack. The militants’ drone attack on the East-west pipeline, which links Saudi oil fields and the Red sea shipping terminals, caused it to stop working for 10 days.

The Houthis’ missile and drone attacks on Saudi oil infrastructure continued after these incidents. The militants attacked ports including Jeddah and Al-Shuqaiq, population centers, Red Sea shipping lanes, and Saudi Aramco facilities in Jeddah. Despite the peace talks, the Houthis are still attacking Saudi cities and strategic infrastructure.

The Effects of the Conflict on UAE

On a parallel line, the Houthis have also launched missile and drone attacks on UAE, the third-largest oil-producing member of OPEC and the world’s seventh-biggest oil producer. So, disrupting its oil supplies can cause oil price spike. The first attack on the Abu Dhabi National Oil Company (ADNOC) in January 2022 has killed three people and renewed the UAE’s involvement in the Yemeni war. According to CNBC, the “international benchmark Brent crude futures advanced 1.19% to $87.51 per barrel, while U.S. West Texas Intermediate futures settled 2.43% higher at $85.43 per barrel.” The prices hit the highest level since 2014. This price spike reflected the tension over having a war in the Middle East besides the potential conflict between Russia and Ukraine.

The UAE has withdrawn its troops from Yemen in 2019, however, the UAE helped recapture territory seized by the Houthis in the central Yemeni province of Shabwa, which infused the Houthis missile attacks. One of these attacks set off explosions in fuel tanker trucks. The UAE government announced that they are going to retaliate. The Ministry of Foreign affairs condemned the attack adding that UAE “reserves the right to respond to these terrorist attacks and criminal escalation.”

This might add fuel to the fire, adding more tension to the region and dragging UAE into a war with the Houthis and, hence, Iran can disturb the energy market for a long time.

Nonetheless, the Houthis have stricken three more missile attacks on UAE that were intercepted. The attacks have been followed by airstrikes on important targets in Yemen. The Houthis also seized an Emirati ship in the Red Sea. They claimed the ship carried weapons. The coalition announced that the ship carried medical equipment and threatened to attack Houthi-held ports if they don’t release the ship. Based on the latest events, till the date of publishing this article, the ongoing strikes from both sides do not promise any peace settlements soon.

The long seven years conflict in Yemen has till now caused human, political, and economic loss to the country and to the involved parties. The Houthi’s attacks on oil plants and infrastructure are threatening the global economic recovery. They are meant to stop the Saudi coalition, however, they are also affecting oil and gas prices worldwide. With a prospect war in Europe, experts hope a settlement to the Yemeni situation will be found soon.