Why Decarbonize the Upstream Sector? 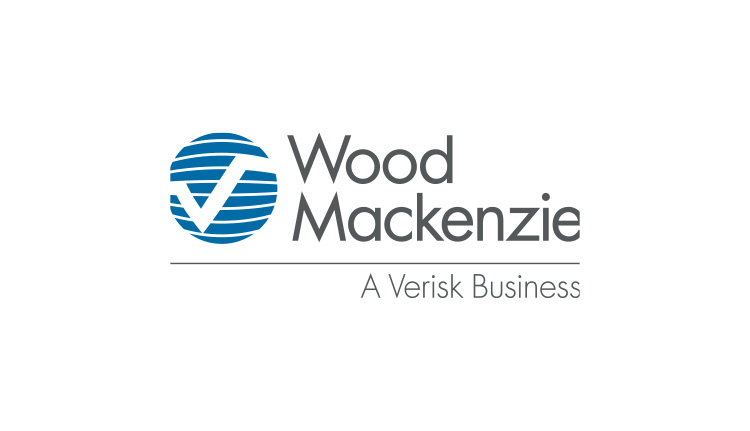 As the energy transition unfolds, upstream companies are coming under increasing pressure to decarbonize. Governments, investors, financial markets, society, and other stakeholders are pushing for change. Companies need to define their transition strategies, future-proof their business, and protect their social license to operate.

There are strategic advantages to producing less carbon-intensive hydrocarbons. Some consumers are looking for a cleaner end product and may be prepared to pay a premium. Lower emissions operations not only offer environmental gains, but many of the steps are value accretive.  This includes greater production efficiency, reduced leakage, and the capture – and monetization – of flare gas and methane fugitives.

More and more companies are announcing bold commitments via carbon reduction, net zero, and/or Scope 3 targets. Divestment is one way to help meet these goals, but for many assets, especially those on production, this simply passes the problem down the line. Applying decarbonization solutions can reduce operating emissions where operators do want to retain their portfolio of assets.

Where do upstream emissions come from?

Emissions occur throughout the whole hydrocarbon value chain – from wellhead to end-use. Some upstream companies are taking the bold step to tackle Scope 3, which accounts for around 90% of all emissions in the value chain of a hydrocarbon. The majority are generated by combustion in power generation, transportation, and other final consumption.

But there is much still to do on scopes 1 and 2 at upstream installations, which currently generate around 1.3 billion tons of CO2e per year (approximately 3.6% of global emissions). These are the operational emissions that upstream producers have control over.

Each asset is different, so it will come as no surprise that there are regional variations. Oceania is heavily influenced by Australian LNG projects, high CO2 projects in Asia drive up venting to over 10% of total emissions, and flaring contributes a third of Africa’s output.

Source: Wood Mackenzie Lens Upstream, Emissions Benchmarking Tool. Emissions are aggregated globally in the charts, but based on underlying asset-by-asset data and models. Excludes transportation emissions (not all oil and gas companies own pipelines and/or tankers, hence they are not considered Scope 1 and 2 here).

What are some of the solutions?

Around 70% of emissions are produced to power oil and gas operations – production, processing, liquefaction, and drilling. The type of fuel used to generate power is crucial. Most assets are powered by fossil fuels – using a portion of the produced hydrocarbons. Electrification gives operators the option to move to low-carbon power, either directly from renewables or by connecting to the grid where the grid mix is cleaner than the alternative fuel supply.

As well as lower emissions, electrification reduces maintenance, lowers fuel requirements, increases uptime, and frees up more molecules for sale. But there are challenges: 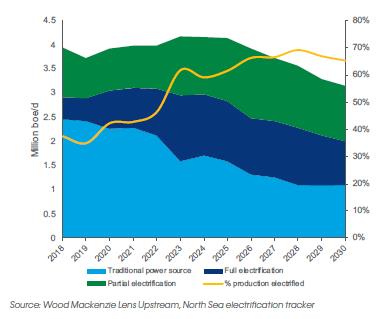 Norway is the global leader in low-carbon upstream electrification.  Its power mix is predominantly hydroelectric (90%+) – a renewable energy source without any corresponding intermittency issues. This, combined with the highest carbon taxes for E&Ps globally, has helped advance decarbonization efforts. By next year, over half of Norway’s production will be either fully or partially electrified.

Essential flaring is hard to avoid, but many companies are now signed up to the World Bank’s Zero Routine Flaring by 2030 initiative, which targets an end to the practice of routine flaring no later than 2030. However, in some countries, large-scale flaring is a function of the reliance on income from oil exports. Gas is a by-product and is more economic to flare as building the necessary commercialization infrastructure can be very expensive.

Where feasible, gas capture projects offer an option for the large-scale flarers to limit emissions. Gas capture can provide an additional revenue stream for the companies involved, greater income via taxes for governments and help satisfy unmet power demand, as well as have environmental benefits. Key considerations include:

Methane is the molecule that packs a punch – it is 28 times more potent (over a 100-year horizon) than its carbon counterpart according to the 5th IPCC Assessment Report (2014). The oil and gas sector contributes almost 25% of global methane emissions, and as such, it has a key role to play. Many companies and governments have already signed up to reduction pledges, including: 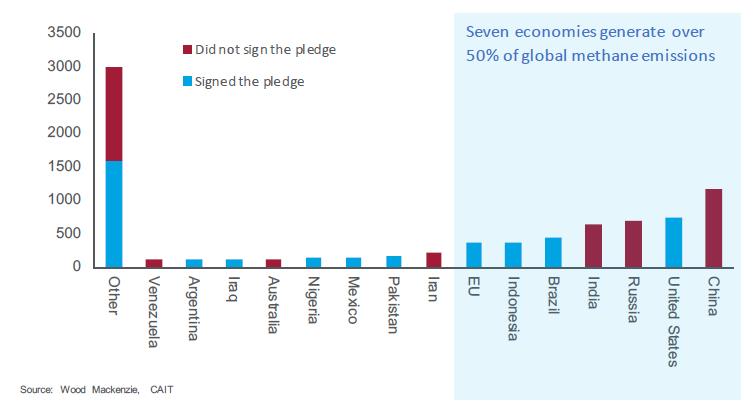 Oil and Gas Climate Initiative (OGCI): members, comprising over one-third of global operated production, have pledged net-zero methane emissions by 2030, in which Wood Mackenzie is a supporter and has endorsed this commitment.

The pace of decarbonization varies from region to region, and asset to asset. One of the key differentiators is the level of government support. 130 countries have made pledges to reach net zero by 2050 to 2070, covering almost 90% of global emissions. However, no major economy is on track to achieve these very challenging goals.

Commitments that have been translated into law only cover around 16% of the total 36 gigatons of CO2 emitted in 2021, meaning that pressure to decarbonize will increase significantly as governments work pledges into legislation. So far, 72 national and sub-national carbon prices and markets are in place, covering around 26% of global carbon emissions (of these, China is around one-third), and another 49 are under consideration. We expect a significant global expansion of carbon prices, and increased prices aimed at meeting 2050 goals.

Some countries have also been exploring carbon border taxes. The European Union (EU) is due to introduce one in 2023, which will be fully effective by 2027. At that point, importers of certain commodities, including refined products, will need to pay carbon prices aligned with the ones paid by EU producers (which have been over US$80/ton CO2e for most of 2022).

Most countries’ oil and gas upstream operations are not directly subject to carbon prices yet. Carbon pricing mechanisms typically encompass Scope 1 emissions in specific sectors directly, such as power generation first, followed by some industrial sectors.

Integrated companies can be impacted directly, while independent upstream producers will be indirectly affected by lower demand down the value chain and by carbon prices passing on higher power prices to the grid.

Tackling Scope 1 and 2 emissions is fast becoming the minimum requirement for upstream operators, as they face increasing stakeholder pressure to decarbonize. Even if they do not have any direct value at risk from carbon prices today, due to the location of their operations, they may not be able to attract investment unless they show structured and realistic plans for decarbonizing their operations.

For this reason, many companies have taken bold initiatives to reduce Scope 3 emissions, not just Scope 1 and 2. Given the lack of direct control, upstream operators can change their vendors and buyers towards lower-carbon value chains, for example, or take a more hands-off approach by buying carbon offsets to compensate for emissions down the value chain.

The most successful strategies will employ a mix of approaches that leverage their existing subsurface and market capabilities and employ them in areas such as carbon capture and storage. Taking bold, decisive action on decarbonization is the only way to create sustainable business models that will continue to attract investment.