When A Virus Becomes A Political Tool 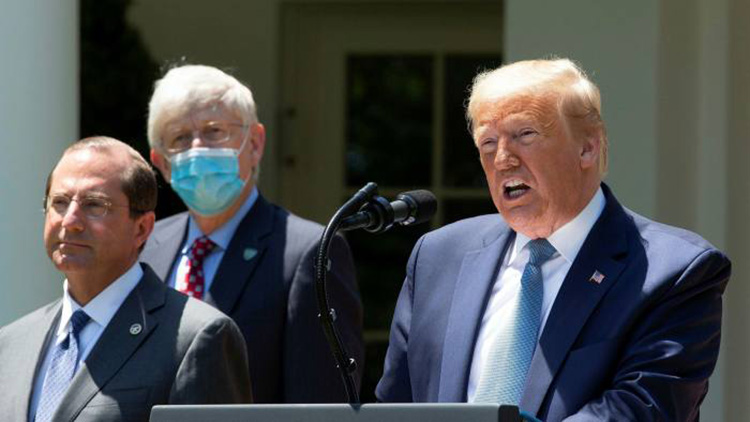 The new coronavirus pandemic has spawned a serious public health crisis, devastated economies and changed social norms around the world. However, the danger of evolving it into a weapon that can be wielded in political conflicts may be the last thing the world needs today.

With the ongoing fighting in Libya, strikes in Syria and guerrilla wars in several African countries, it became clear that the pandemic could worsen conflicts and even exacerbate the risks of the humanitarian situation and population movements.

Still, parties to these conflicts see the pandemic as a chance for achieving more gains.

However, the most important showdown linked to the coronavirus in the political arena is in the US where the November election seems to hinge on the way American voters see President Donald Trump’s response to the pandemic and where Democrats have focused their efforts on framing Trump’s response as an abject failure.

The US president even began to look at the coronavirus as part of a conspiracy against him. His belief prompted him to point fingers everywhere. He blamed the World Health Organization (WHO). He blamed the governors. He blamed the media. He recently asserted that “China will do anything they can to have me lose this race.”

Before the emergence of coronavirus, Trump was preparing for his reelection as an incumbent president riding a strong economy and a massive cash advantage; today, he is haunted by his lackluster response to the virus that jeopardized the healthcare sector, and raised expectations of a recession that will eliminate billions of dollars from the value of US companies and send millions of Americans to the jobless queues.

The crisis even threatens one of Trump’s hardly-won and shortly-lived achievements of turning the US into the biggest oil producer. With a recent slump in demand and prices war, US shale producers, which have far higher costs than their Arab and Russian rivals, are collapsing, reversing a decade-long march towards energy independence.

Many of Trump’s critics see that his administration was slow to act at a time when each day of inaction mattered most. Trump’s response was largely seen milder than what public health experts have recommended. These delays led the US to make more drastic economic sacrifices to catch up to the severity of the pandemic.

The US Congress has authorized roughly $3 trillion in coronavirus relief in four separate measures over the last two months to protect the economy from long-term harm caused by lockdown orders and respond to the impact of the virus.

Over the same period, the number of Americans who sought unemployment benefits reached 33.3 million – or about 20% of the US workforce.

The country, during the same period, has suffered its worst growth rates in a decade, the worst retail sales report on record, and drops in business activity not seen since the financial crisis in 2008. The world’s largest economy sank at an annual rate of 4.8%, according to official figures released in April by the US Department of Commerce.

The frustration from Trump’s acts, that included an advice to people to inject disinfectants into their bodies to fight the virus and the fear of the virus dire consequences, provided a perfect atmosphere for Trump’s rivals.

In an opinion column to the Washington Post on May 11, the presumptive Democratic nominee for the president, Joe Biden, slammed Trump’s policy towards coronavirus, which to that date had taken the lives of more than 79,000 Americans. Biden described the situation as an “extraordinary moment — the kind that begs for urgent, steady, empathetic, unifying leadership.”

“But instead of unifying the country to accelerate our public health response and get economic relief to those who need it, President Trump is reverting to a familiar strategy of deflecting blame and dividing Americans,” said the Democratic nominee.

The Trump’s administration insisted in different occasions that “President Trump’s coronavirus response has been unprecedented and saved American lives.” President Trump even insisted that the US is providing a role model for the world in dealing with the virus.

However, as the US has emerged as a global hotspot for the pandemic and the death toll has been rising dramatically, many Americans think that Trump’s claims to global leadership may be more than far-fetched rhetoric.

According to a Reuters/Ipsos opinion poll, which was released on May 18, more Americans have grown critical of Trump as the death toll mounts from the coronavirus pandemic and he now trails Democratic opponent Joe Biden by 8 percentage points among voters.

The poll showed that only 41% of US adults approved of Trump’s performance in office, which is down 4 points from a similar poll that was conducted in April.

The poll also indicated that 46% of voters would back Biden in the November 3 presidential election, while 38% would vote for the incumbent president, compared with a 2-point Biden lead in a similar polling a week before.

In his defense against rivals, Trump opened his fire everywhere raising the risk of weaponizing the pandemic. He began his counterattack against the democrats by casting doubts over the ability of Biden to handle the catastrophe.

Trump and his allies are working to paint his rival as a feeble alternative to a president such as Trump who was tested by the coronavirus pandemic and the economic mishap it has caused.

Trump even tries to depict his opponent as a friend to China’s leadership, which Trump accuses of being responsible for the coronavirus.

Many observers see Trump’s rhetoric against China as an apparent distraction from domestic criticism of his slow recognition of the crisis. So, as usual, the President is resorting to attack as his best form of defense.

A Battle with Everlasting Impact

Still, Trump’s fate in November elections depends on his ability to combat the disease or to develop good rescue tools that can mitigate the effects of the virus especially on the economy.

Trump offered promises to save stumbling industries and to save jobs through historic stimulus packages.

However, the problem of one important sector looks too complicated to solve.

Falling oil prices caused by COVID-19 lockdowns and Saudi Arabia and Russia flooding the market in a price war have led US oil companies to close down half of their oil rigs. According to a Bloomberg report, the US oil and gas industry lost 51,000 drilling and refining positions in March alone.

Highly indebted firms may not be able to obtain further bank loans or perhaps even stay in business. States such as Texas and North Dakota, where oil industry is a big part of the economy, would face hard times. The pain could spread to the entire US economy and is expected to cost Trump dear during the November elections in the same states where Republicans dominated for decades.

The defining moment arrived when oil prices plunged below zero for the first time in history. While it has since bounced back into the green, it has well below the level needed for producers to go on in their business.

With hundreds of thousands of jobs at stake, Trump had to use all his political and diplomatic powers that included pressuring the Organization of the Petroleum Exporting Countries and their allies (OPEC+) to make historic production cuts or even raise the prospect of armed confrontation with Iranian forces in the Arabian Gulf.

As the very industry whose growth allowed Trump to boast cutting US dependence on Middle Eastern oil, and gave him power to sanction energy exporters from countries such as Iran and Russia, the oil and gas industry is now turning into a thorn in the back of the president who promised to help companies through a plan to channel funds into the industry.

However, experts see that the proposed government loans would be a dangerous measure to blunt further economic pain for an industry already under pressure and drowning in debt.

Still the question is, how many of the president supporters will remain loyal to him until November. It all depends on the success of Trump to fulfill any of his promises; to find a vaccine; save the economy from collapse; and maybe punishing countries that according to him were responsible for the world’s suffering.