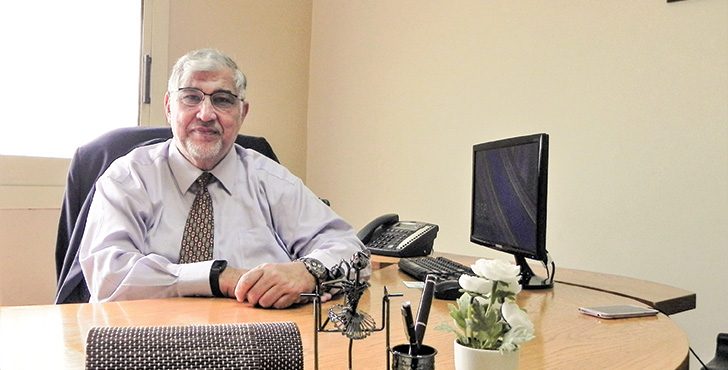 As Egypt expands its energy-extraction and -production sectors, it faces the growing challenge of waste management. To help its readers better understand the nature of the challenge and its possible solutions, Egypt Oil & Gas sat down with Dr. Ahmed Abou Sayed, a global expert on Production Enhancement and sustainability, with emphasis on waste management.

He is the founder of Advantek International and co-founder of Advantek Waste Management Services. He served as a Member of the American Rock Mechanics Association (ARMA) Board of Directors from 2005 to 2011, He was the Technical Director for Production & Operation on the Board of the Society of Petroleum Engineers (SPE) and a UN Advisor from 1979 to 1983.

In the light of your experience in hydraulic fracturing and unconventional oil and gas resources, what do you think of Egypt’s first unconventional reservoir, the Apollonia Reservoir?

It is a very promising resource for Egypt to exploit. The technology of hydraulic fracturing has been around for a long time and has created millions of jobs in the US. Hydraulic fracturing, at one point, was responsible of almost 30% of the US total oil and gas production.

Unconventional shale oil and shale gas produce almost 2.5 million barrels of oil equivalent per day (BOE/D) in the US—which is quite a bit—making the US the current swing producer of the world.

For Egypt, it is, perhaps, an appropriate time to get into hydraulic fracturing. Egypt has a reputation of expertise with this technology. Several Egyptians are prominently linked to it around the world. So anytime the US, or any other country, is looking for experts in hydraulic fracturing, there are at least one or two Egyptians among the selection pool.

I think we are ready to use this technology in Egypt.

And do you think Egypt’s geography and geological nature promise more than just one unconventional reservoir?

Conventional wisdom and science show that a country with oil and gas resources most likely has shale-gas or shale-oil resources. In other words, if hydrocarbon reservoirs exist in an area, chances are you will also find shale oil and gas as part of the source rock.

From your point of view, what is the best method of waste management for Egypt to adopt at the Apollonia Reservoir?

The amount of associated waste (rocks, fluids, chemicals) from unconventional resources is substantial. One way to manage such waste is to handle the rock removed from horizontal wells in an environmentally safe manner. Another aspect would be to better manage the chemical waste which comes back from shale gas with the hydraulic-fracturing fluid.

We believe that, frankly, one of the most prominent and most used technologies for waste management is injection. Injection is used in managing the waste of specific wells to prevent unsafe products from flowing along the surface.  It has been applied all over the world. It has been used in Alaska for years to dispose all the cuttings and all the waste streams. We have injected more than eight billion tons of waste from oil and gas fields.

Asked about the injection technique, Abou Sayed, explained that it is exactly the same as hydraulic fracturing.

We mix solids with fluid to ease transportation of solid substances. We then inject it, we inject the slurry, under pressure, into fractures deep underground. Once there, it will stay there forever. So one walks in, develops the field, and uses the injection technology to dispose of wastes, rocks, cement, and produced water—nothing is left to worry about. It leaves the surface and environments basically clean. It is a permanent solution to waste management. It has no lingering problems—so no one is going to worry about what is going to happen in the future—and also, with proper design, it can keep the waste from mixing with existing ground waters.

Injection technology is not only useful to oil and gas, but it is also useful for chemical plants and for waste hazards from other industries, such as petrochemicals and paper.

Waste management via injection has been applied worldwide in different fields. The cost is reasonable. For a country like Egypt, the trickiest problem right now is how to minimize the impact of pollution on the population—and it is not a simple problem.

When Saudi Arabia tried to develop the Manifa field, it used injection technology to manage waste from the drilling and production operations in order to prevent pollution in the Gulf of Arabia. ADCO utilizes the same technology in the UAE.

In your opinion, if Egypt does not find a way to decrease its Mediterranean pollution, will it face problems with European countries?

European countries are starting to be concerned about the Mediterranean in general, especially in terms of the lack of a coherent waste-management and pollution control plans.

One of the current problems is the Manzala Lake. Manzala is almost entirely sewage—a lot of chemicals are being dumped there. It affects fisheries and affects fishermen’s lives.

I believe that injection technology will be as suitable in the Mediterranean as it is in the Gulf of Arabia. This technology is used in the North Sea, the Gulf of Mexico, the Gulf of China, Malaysia, and Indonesia for offshore waste management; waste is not dumped into water anymore.

You were in Japan recently for the Fukushima Nuclear Power Plant decommissioning. What do you think about nuclear activity and about Egypt’s plan to establish a nuclear power plant in Debaa? Would that technology be suitable?

Yes, but I am not stating my personal opinion. With proper precautions—if everything is done safely and carefully—nuclear energy is a very clean and efficient way to generate energy in a country that does not have enough resources.

I trust that the Egyptian government has carefully considered the location of the plant along the North Coast. I understand why it needs seawater—for cooling. I am cautious that it is in the middle of a huge tourist development and there are a lot of people surrounding it, but I am sure the government has done enough studies for Egyptians to support the decision.

Would you suggest that injection technology be adopted for nuclear-waste management?

The waste of nuclear plants, in general, is problematic across the whole world. France declared that the best disposal option for nuclear waste is to place it underground.

When asked about the dangers of burying waste, Abou Sayed, explained that the process is not dangerous. Many areas of the world have uranium resources underground. I think of the ground as an isolator. That is why the early man lived in caves, because he could shelter himself from heat, cold, insects, and animals and the elements.

Are there any lessons from the Japanese nuclear projects that Egypt should consider while developing the Dabaa project?

The Japanese have had excellent success in managing the crisis to-date. Their number one focus has been on protecting the population around their nuclear sites.

A major issue they faced at the beginning was how to handle rainwater within the radioactive zone to prevent it from washing away to the ocean. They tried to store it in tanks, but that solution became unpractical. They now run it into the aquifer to prevent the contaminated water from running into the ocean. The problem they face now is what to do with the contaminated aquifer.

What about plants, underground water, and wildlife, won’t buried radioactive waste affect them?

No, waste is typically buried in deep layers, more than 3000 or 4000 feet underground.

What is your opinion of Egypt’s vision to become a regional energy hub? What do you think the government should do to ensure the achievement of this vision?

I am very optimistic. I think that our trained staff, our engineers, and scientists, combined with the amount of activity going on in the Mediterranean, will give us the opportunity to develop the entire area off the Mediterranean coast

We have the human resources to generate service, transportation, logistic companies. We will also produce significant amounts of natural gas much closer to Europe than Qatar or Russia. Our production can reach Western countries a lot quicker and more efficiency than production from other countries.

I don’t see why we cannot use compressed gas rather than liquefied natural gas (LNG) to transport our natural gas to Europe. It will take less time and will become much cheaper.  Compressed gas is also safe.

What steps should Egypt adopt to ensure both the state and the investors benefit from the development of Mediterranean resources?

I am very pleased to see the government has taken steps to rein in corruption. I’m also very pleased to see legal stability. We no longer change our laws as quickly as we did in the past, so investors can better predict earnings from their investments.

Concluding the interview, Abou Sayed expressed his optimism about private enterprises in Egypt, particularly emphasizing the importance of small- and mid-scale companies in economic development. These small, privately owned enterprises, he predicts, will harness the economic capacity of Egypt and its natural resources and prove the true drivers of growth in Egypt as they expand their operations in both the domestic and international markets and creates jobs for the young population.