Seven Years After Gaddafi: Where Does the Libyan Oil Market Stand? 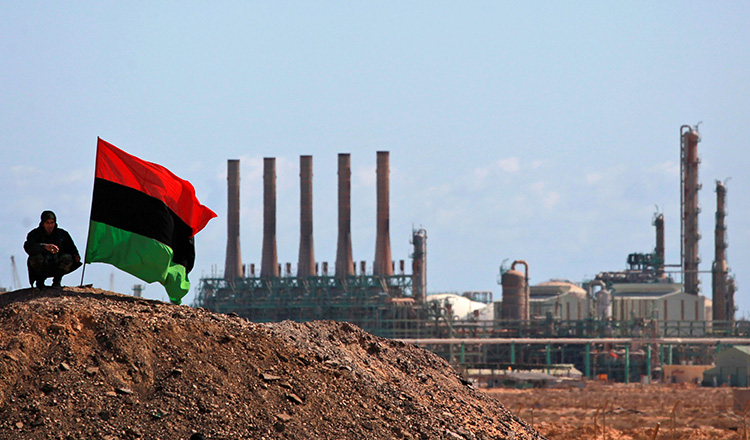 Libya possesses the largest proven oil reserves in Africa and the ninth biggest reserves worldwide with an estimate reserves of 47.1 billion barrels. The country used to be a main oil exporter to Europe for decades as its production reached a peak of 3 million barrels of oil per day (b/d) in the 1970s. Only seven years ago, before the uprising that ended the 42-year rule of Muammar Gaddafi, the north African country was pumping more than 1.6 million b/d. As the country is currently torn between rival governments and tens of militias, it is struggling to maintain a production level of 1 million b/d.

While 1 million b/d might sound little for a country with as huge oil reserves as Libya, this production rate is considered positive looking back to an average daily production of around 400,000 b/d that Libya stuck in between 2014 and 2016.

The country’s production rates started to recover in 2017 with an output of 1.3 million b/d in July, a number that slightly decreased toward the end of that year. In the same month, the Libyan National Oil Company (NOC) declared an ambitious three-phase plan to reach production of 2.2 million b/d by 2023, yet due to the ongoing stability, this goal sounds very challenging.

Libya has been politically and economically unstable since toppling Gaddafi, who built a one-man-regime with no state apparatus able to manage the country’s resources during crisis time. Additionally, as little urban development efforts were made in the country during Gaddafi’s rule, the state was easily fragmented into tribes with easy access to weapons after Gaddafi’s fall. With guns being already in Libyans’ hands and the rise of the Islamic State in Iraq and Syria along with other small radical groups in the region that was already shaken by the Arab Spring, Libya became a failed state.

A study made in 2014 estimated that there are approximately 1,600 armed groups in the country, the Netherlands-based Clingendael wrote. There are two main rival governments in Libya now. The prime minister Fayez al-Serraj’s UN-backed Government of National Accord (GNA) based in Tripoli, which has control over western Libya, and the  Libyan National Army (LNA) strongman Khalifa Haftar – a military figurehead of the Tobruk-based government headed by Faraj al-Hassi – who controls the east.

Civil War Rule: Get the Oil, Get the Country

Since 1960, Libya started to intensify its oil investments making the country’s economic growth exceed 20% throughout the 1960s, which was one of the world’s highest rates, according to The Middle East Research and Information Project (MERIP). Directing all the state efforts to the oil sector had its bad economic impacts as other economic sectors were neglected.  For example, agriculture’s contribution to the country’s total income recorded 25% in 1960. Only nine years later this share shrunk to 5% as investors and employees started to shift from economic sectors to oil, turning the country into a pure rentier economy.

Accordingly, since the eruption of the civil war in 2011, all the players know the rules of the game: whoever controls oil facilities and fields, controls the country. Even when oil selling is not internationally legal except through the NOC, militias and other local players know that controlling an oil field makes them have the upper hand during negotiations, as the NOC secures oil operations through periodical agreements, sometimes even weekly agreements, with tribes.

Following this, oil fields and facilities have been subject to many attacks in the past seven years, which was the main reason behind the country’s output decline. Riccardo Fabiani, geopolitical analyst at Energy Aspects, believes that the civil war’s impact on the Libyan oil sector is not only limited to reducing production rates. “There is a lack of investment and maintenance and facilities are routinely closed by armed groups to extract money from the government. Moreover, there is virtually no exploration taking place,” Fabiani explained to Egypt Oil & Gas. Lack of exploration and maintenance represent another challenge to the government’s plan to produce 2.2 million b/d by 2023.

To What Extent has the War Affected Oil Production?

Although Haftar and the GNA had agreed in late 2015 that the NOC is neutral, Haftar announced the handover of oil facilities in the east to his allies in the east Libya administration instead of the NOC only few hours after the LNA had freed the facilities from the militias.

Haftar’s move halted production from facilities with capacity of 850,000 b/d,  leading to a significant decrease in Libyan oil production.

“Today, production is 527,000 b/d, tomorrow it will be lower, and after tomorrow it will be even lower and everyday it will keep falling,” Mustafa Sanalla, chairman of the Tripoli-based National Oil Corp, said in a video statement posted on the company’s Facebook page commenting on Haftar’s movement.

The fights to free the facilities from militia lasted from February until June, halving the country’s production. Haftar reversed his decision and on July 11 struck a deal with the GNA that ensures publishing the central bank and oil facilities budget. However, the movement shows how unstable Libyan oil production is.

The GNA’s plan to increase production was not received as good news around a year ago, since back then oil prices were decreasing due to too much production. However, the Organization of the Petroleum Exporting Countries (OPEC) is currently easing production cap to cover shortages caused by falling Venezuelan and Angolan output along with concern about decreasing Iran’s production after the US sanctions.

“Any lost barrel from Libya will be very painful,” Commerzbank analyst Carsten Fritsch told Reuters. “It could not have come at a more inconvenient time.”

On the other hand, Fabiani believes that decreasing Libyan production is no longer a surprise in the international oil market. “The oil markets are resigned to the idea that Libya’s spare capacity has fallen to zero and that there are considerable downside risks to production. Libya is another problem that adds to an already tightening market where spare capacity is becoming a real source of concern,” he said.

The GNA’s 2017 plan is to increase production gradually within six years until it reaches 2.2 million b/d in 2023. The target was to increase production by 1.32 million b/d by the end of 2017, a number that was only recorded in the same month of the plan announcement. It fell to 871,000 b/d in August and then kept an average of approximately 900,000 b/d in the remaining four months of 2017.

By the end of 2018, the GNA aims to increase production to 1.5 million b/d, a target that was already exceeded in February as 1.7 million b/d were produced. Yet, production fell to the 900,000 b/d average in the following three months, subsequently falling to 708,000 b/d in June post the eastern facilities halt.

Fabiani believes that it is difficult for the government to keep up with this production plan in the following years. “There is a ceiling in production terms that is very difficult for the Libyan authorities to exceed – increasing output well beyond the 1 million b/d threshold is very challenging, because it would require a degree of stability and security in the oil sector and significant investment to carry out complex and costly repair work,” he explained.

“There is not much else the GNA can do at the moment – they are under pressure from all sides and the NOC has so far done an exceptional job at keeping most facilities open and oil flowing. It is already a miracle that Libya is producing at close to 1 million b/d,” Fabiani added.

In late May, political actors took an important step toward stability as representatives of the main four authorities in the country endorsed, but did not sign, a statement to hold a “credible, peaceful” parliamentary and legislative elections in the country on December 10. The GNA’s al-Serraj, the LNA’s Haftar, the president of the house of representatives, and the head of the council of state agreed to create the legal and constitutional basis necessary for the elections. However, news has been circulating that the parliamentary election will be postponed to the first half of 2019.

Fabiani believes that the elections will be postponed not only because of the power conflict between the two governments, but also because he believes that Hafter is not interested in it. “Haftar is uninterested in elections now, because his goal is to strengthen his own position after the mysterious hospitalization in Germany a few weeks ago and, more recently, the temporary loss of the eastern terminals – his priority now is to reaffirm his authority and only later to participate in elections,” he added.

Peace is the Way to Go

The geopolitics expert believes that ending the ongoing civil war is the key step to break the 1 million b/d ceiling for a long period.  “[As] long as the country remains divided and war goes on, it is hard to imagine that the Libyan authorities will be able to increase output beyond that level – not to mention reach 2.2 million b/d, which is impossible in the current conditions,” Fabiani added.

Looking at how much political stability and power conflicts affect the country’s production, it is clear that the development of the Libyan oil sector does not only need a plan by the NOC but also need the political well of all the involved parties to end fights over power. “Only a peace deal and the formation of a unity government could help the energy sector gradually recover and slowly push up production beyond the 1 million b/d ceiling,” Fabiani added.