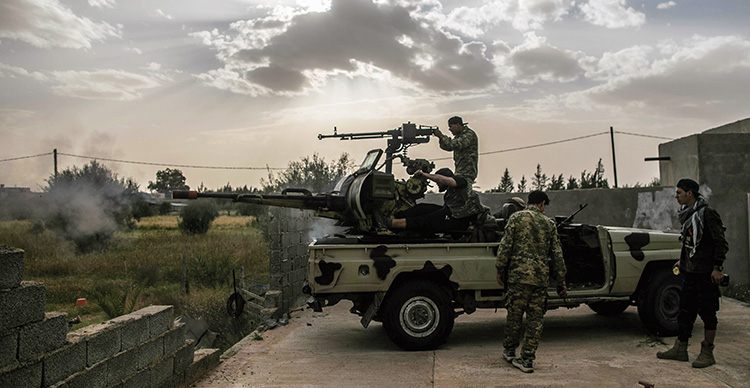 After a year of escalating violence, Libya’s rival authorities have announced an immediate ceasefire on August 21. The long-awaited truce calls for elections in March 2021 and for talks to demilitarize Sirte, which could avert Turkish-Egyptian clash over the strategic city.

Tripoli-based, internationally-recognized Government of National Accord (GNA) announced the truce, which was welcomed by the United Nations (UN), the United States (US) and other Western countries. The truce was also agreed by Aguila Saleh, speaker of the eastern-based parliament, which supports the head of the Libyan National Army (LNA) Gen Khalifa Haftar, who controls large parts of the east and south of Libya.

Despite the uncertainty that still lingers over the truce, it can be seen as a step to end the violence that dominated the North African country since Col Muammar Gaddafi was deposed by Nato-backed forces in 2011.

However, one of the most important gains of the truce could be the new high prospects to restart the country’s oil production and exports.

Provoking an Oil Turmoil Since the overthrow of Gaddafi, oil has been at the core of unrest in the oil-rich country, where the oil and gas industry accounts for more than 60% of the country’s gross domestic product (GDP), according to Organization of the Petroleum Exporting Countries (OPEC)’s website

Different factions have used oil facilities as bargaining chips to press their demands. Fields and ports in Libya’s east were blocked between 2013 and 2016.

While the sitting government retains stewardship of the Libya’s ational Oil Corporation (NOC) and the Libyan central bank, Haftar has mobilized his forces and tribal allies to shut down production sites and shipping facilities around the country.

The conflict between the LNA and the GNA has intensified over the past year, as each faction seeks to assert control over the capital Tripoli.

In the beginning of 2020, eastern tribes, supported by the LNA, halted exports from key oil terminals, to slash production from more than 1.1 million barrels per day (mmbbl/d) before the blockade to around 70,000-110,000 barrels per day (bbl/d) in the past few months. Before the 2011 revolution, Libyan oil production used to stand at 1.6 mmbbl/d.

The blockade has now left the country on the brink of a financial crisis with oil production in the country falling more than 80%. Now it seems that the oil sector, that was the epicenter of the conflict, may be the key for peace.

While declaring the truce, the head of the GNA, Fayez al-Sarraj, called for an end to an oil blockade imposed by rival forces.

The ceasefire also comes days after the LNA’s Petroleum Facilities Guard of Libya’s eastern oil terminals said it would reopen key oil ports to allow exports of some barrels from storage.

NOC welcomed proposals from rival authorities to lift a seven-month oil blockade and place revenues in an independent bank until reaching a political settlement. In August, NOC announced that the total losses resulting from the closure of oil ports, during the period between January 18 and August 12, had reached $8.22 billion.

The conflict also had a negative effect on the revenues of international oil companies (IOCs) working in Libya including Eni, OMV, Total, Repsol, ConocoPhillips and Hess. It also offset NOC’s expansion plans which targets to raise production to 2.1 mmbbl/d by 2022, for which it needs to attract $60 billion in investments.

NOC’s announcement that it could restart oil exports after the declaration of the ceasefire put further pressure on world oil prices. The return of Libya’s production as the world oil demand still affected by the coronavirus pandemic may also put more pressure on the next OPEC+ ministerial panel in September 17.

The fall in Libya’s oil production throughout the year was a bliss in disguise for other OPEC members who grappled with production cuts to readjust oil prices amid the pandemic.

Some analysts even doubted that backers of Haftar, which include Saudi Arabia and Russia, leaders of the Opec+ alliance, were not exerting enough efforts for reaching an agreement, which will see Libya’s crude oil flooding the market at a time when they are making their own supply cutbacks.

As the conflict goes on, the North African nation that owns one of the largest oil reserves in the world (48.4 billion barrels of proven oil reserves, according to OPEC )has become the venue for a proxy war with a number of foreign powers joining in to defend economic and ideological interests.

The Turkish move to enter the Libyan conflict can be seen as the most dangerous in this proxy war. Turkey has deployed its military forces and Syrian militias to Libya. It also broke the United Nations’ arms embargo on Libya and supplied drones and air defense to the GNA. The Turkish interference was a game changer in the conflict that it helped the GNA to push Haftar forces back.

Besides securing lucrative opportunities for Turkish companies in the Libyan market, the gas-thirsty Turkey succeeded to sign a deal on the delimitation of the maritime jurisdiction areas in the Mediterranean with the GNA. The deal has further added to the anger of Turkey’s neighbors, primarily Greece and Cyprus, that contest Turkey’s drilling rights in the waters.

The Turkish interference in the Libyan conflict also has its ideological aspect as most of Haftar’s support comes from Saudi Arabia, the United Arab Emirates (UAE) and Egypt. All three countries are united in their bitter opposition to the Muslim Brotherhood, which is supported by Turkey.

The Turkish interference also prompted Saudi Arabia, Egypt and the UAE to maximize their help to Haftar who they considered as an ally against the spread of political Islam and in particular the Muslim Brotherhood.

The Turkish advances recently prompted Egypt’s threat to intervene in neighboring Libya with the intention of protecting its western border with Libya, and to bring stability, including establishing conditions for a cease-fire.

Egypt and Greece have recently signed a maritime deal that sets the sea boundary between the two countries and demarcates an exclusive economic zone for oil and gas drilling rights. The new Egyptian-Greek agreement came in response to the Libyan-Turkish deal which is considered by  Egypt to be null and void.

The Libyan conflict scene is also witnessing the existence of Russia on the side of Haftar as it seeks to expand its influence in the region in the absence of a unified Western engagement.

We can also see the fingerprints of Italy, the former colonial power in Libya, which bets on Sarraj government to bring stability to the country, which Italians consider as a matter of national security and where illegal migrants can find easy access to Europe.

Meanwhile, France, which also has oil interests in Libya, is thought to provide Haftar with military assistance. It also has lent support to Greece in its maritime dispute with Turkey.

The complex Libyan situation even prompted the UN Secretary-General Antonio Guterres to recently declare that the conflict in Libya has entered a new phase, with foreign interference reaching unprecedented levels, including in the delivery of sophisticated equipment and the number of mercenaries involved in the fighting. He explained that almost 30,000 people have been forced to flee their homes due to continuous fighting in Tripoli’s southern suburbs and Tarhouna, bringing the total of internally displaced persons in Libya to more than 400,000.

Guterres added that the UN is working to mediate and end the blockade on oil imports that aims “to alleviate economic hardship compounded by the conflict and COVID-19.”

Being Part of the Solution Rather Than the Problem

Many see the conflict in Libya as a clear example of civil wars fueled by big oil reserves. Similar conflicts can be seen in other places such as Venezuela and Nigeria.

However, a study published by The Journal of Development Studies under the title “Oil abundance and violent political conflict: A critical assessment” found that it is unlikely that the statistical relationship between oil and civil war is likely to be convincing.

However, the research suggests that there is some evidence that once a conflict is under way, some types of natural resources may facilitate the prolongation of war. The evidence thus suggests that factor endowments do not determine politics. The indeterminacy of oil wealth and violence suggests that the nature of conflicts in mineral-dominant economies does not exist prior to politics.

In Libya’s case, we can realize that there are many factors in the Libyan war rather than oil.  The tribal and ideological structure of the country that was ruled by Gaddafi for 40 years cannot be ignored when analyzing the Libyan conflict.

However, oil should be part of any solution to help rebuild the country once the rival factions decide to do so one day.

(This article was written two days after the declaration of the ceasefire. Many developments might have happened until the date of publishing.)