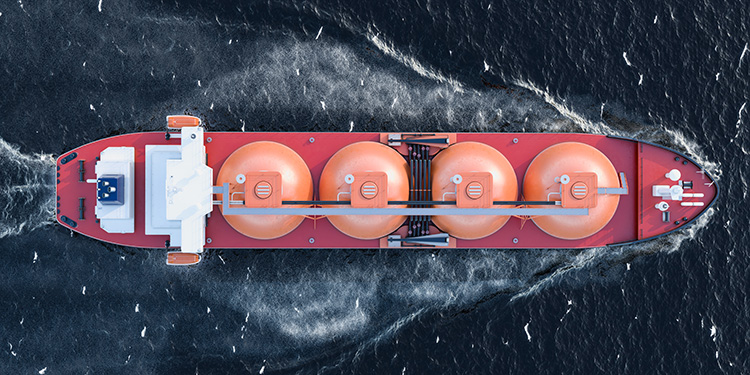 As the world cast around for clean and efficient alternative sources of energy to reduce greenhouse gas emissions and help combat global warming, the conversion to natural gas utilization has become a point of focus worldwide. It was no wonder to see the demand for natural gas increasing and so the demand for safe and cheap ways to transport and store.

According to a recent study by Global strategy consulting firm Mckinsey, global gas demand is expected to grow at 0.9% per year between 2018 and 2035.Since liquified natural gas (LNG) is seen as the best method for transporting and storing natural gas by cooling it to -260° F and so the LNG global demand is projected to grow at 3.6% per annum between 2018 and 35, the study added. A research entitled “The Growing Importance of LNG Market” written by Thang Do, indicated that the role of gas pipelines has diminished over the last decades declining from 73% of total volumes shipped in 2000to 65% in 2020.

Egypt has become one of the leading natural gas producers, thanks to the Zohr discovery which led to covering the local demands and export the surplus abroad. According to BP’s report, Egypt exported LNG 4.5 billion cubic meters (bcm) in 2019,increasing by 2.6 bcm compared to 2018. Accordingly, there is growing interest in providing safe LNG storage and transportation Saad Bedir, Oil and Gas Expert told Egypt Oil and Gas (EOG) “As much LNG [is] available economically as much it is strong support to the national economy”

An LNG Expert, who preferred anonymity, stated that improving LNG transportation means by increasing the number of trains, for example, and using latest applications of technology will increase the quality of the overall LNG process in Egypt and the Middle East.

LNG reduces the volume of natural gas by about 600 times that enables it to be moved in ISO containers on roads and highways as well as on the water.

LNG pipelines are used to transport natural gas from liquefaction plants to storage facilities, from storage facilities to tankers and from tankers to regasification plants. The main challenge of LNG pipelines came from the difficulty associated with its construction, in addition to its high costs. This is because LNG requires specific temperatures to keep its content in a liquid state, which needs to establish insulated pipelines by a combination of mechanical insulation to maintain this temperature level and prevent any regasification. This complex insulation system for LNG pipeline construction is more expensive and difficult than that of standard pipelines.

Transporting LNG via vessels or carriers is always the proper way for exporting natural gas at an intercontinental level because of their ability to carry large quantities of natural gas. LNG carriers are among the strongest, safest and most technologically advanced vessels in the world. They are equipped with sophisticated monitoring and control systems. LNG shipping is an economic and efficient method as long as carriers are bigger in size.

Transporting LNG via trucks is a conventional and practical method. However, certain parameters including the maximum allowed truck weight in the country, the transported LNG capacity, the maximum allowed speed for the trucks, distance from the source to consumer, the loading and unloading conditions, the consumption rate of LNG and the working time are necessary to adopt.

LNG is stored in particular insulated containers and tanks that are built specifically for this purpose. These tanks include cryogenic equipment to keep the natural gas in its liquid state and prevent it from vaporization. The temperature within the tank will remain constant if the pressure is kept constant by allowing the boil-off gas to get out from the tank. The boil-off gas is used as a fuel source for the facility or the vessels that carry LNG.

LNG containers can be placed above or within the ground. Nevertheless, these types of storage applications are less attractive as they require a large area of land. However, underground storage was thought to be an economical way to store LNG, but so far, it has not been satisfactory due to the large boil-off gas rate and the low LNG temperature acting on the rock wall generating cracks in the rock mass. A new concept of storing LNG in a lined rock cavern (LRC) was introduced to provide a safe and cost-effective solution. It can protect the host rock against the low temperature by insulation and providing a liquid and gas-tight liner. Additionally, it can form an ice ring around the cavern with suitable thickness to prevent any groundwater leakage.

Moreover, there are three main types of pressurized tanks. The first type includes single integrity which can hold the refrigerated liquid, but the outer insulation would not able to withstand the LNG in case of leakage. Double integrity is the second type which is able to prevent the uncontrolled release of liquid into the environment. Full integrity is the third type which has an inner and outer container constructed from cryogenic steel that is able to hold LNG and in case of inner tank leakage, the liquid is contained in the outer tank, in which the structural integrity of the complete bullet is maintained.

Safety and security are the main elements necessary to boost LNG production. Some regulations and codes have been set forth by international organizations to organize transportation process, especially by shipping. Additionally, certain standards have been placed on sitting, design, construction, equipment and fire protection requirements for facility and terminal applications.

According to an article published on Discovery LNG, advanced carriers are provided by bow thrusters for increased maneuverability at slow speed while entering or departing from restricted waters. They are outfitted with sophisticated gas and fire detection and suppression systems.

Another article written by David Pendleton, suggests that the majority of the world’s LNG cargo fleet and terminals are equipped with SSL technology; a system for communicating emergency shutdown (ESD) signals, telephone, and process data required when cargo transfer is undertaken from ship to shore and again from shore to ship.

The LNG Expert stressed on the importance of conducting safety sessions for the employees, pointing out that monitoring practices can prevent any incidents before happening.