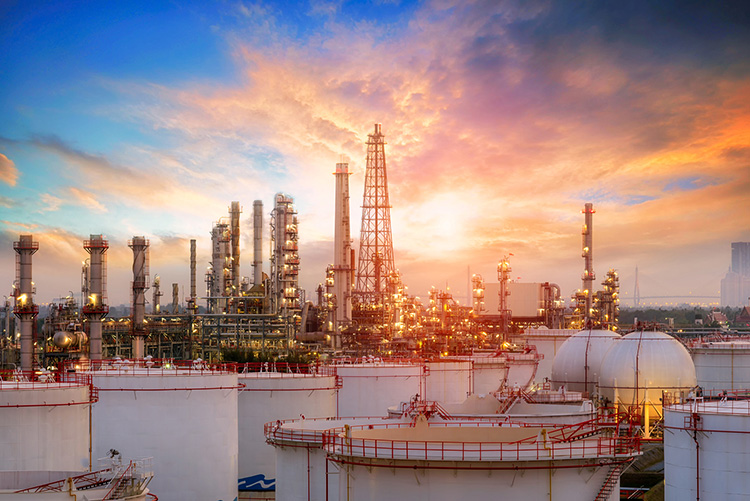 What a year it has been for the global oil and gas industry and all its divisions! Unexpected as it was, it was not all downs, at least for Egypt. Despite the shock of the COVID-19 pandemic, Egypt’s petroleum sector has had a strong year on so many levels and its refining division is no exception.

The oil price crisis of 2020 will not be forgotten any time soon, it slithered its way through every crook and nook of the energy industry. The refining sector, however, pulled through. Refining companies have benefited greatly from the price slump, as they had the opportunity to buy crude at a much lower price than normal, sell it at a normalized price range while making a profit as well. In pre-pandemic times, the high crude prices do not necessarily impact refineries negatively, but they do not guarantee a large profit margin.

However, the current oil prices pose a challenge to the industry as a whole, Nagy Iskander, an Oil and Gas Consultant, explained that “if we believe the current prices will be temporary low and it will pick up in the near future to go back to the $70-80/bbl, then it is wise to invest to upgrade or add additional refining capacity now.” Despite that, Iskander noted that the increase in demand for renewable energy and electric cars in the near future should not be overlooked.  In case it replaces or discouraged the need for fossil fuel “then oil prices will stay low or even drop further and it might be better off to invest in renewables than refining,” Iskander elaborated.

Although 2020 was not a smooth ride for any industry for sure, Egypt remained persistent through it all and its refining sector had major triumphs that year. The Ministry of Petroleum and Mineral Resources (MoP) set an ambitious plan for 2020 regarding the refining sector with a strategy to increase refining capacity to reach more than 41 million tons (mmt) of petroleum products and pave the way to self-sufficiency. Tarek El Molla, Minister of Petroleum and Mineral Resources, has previously stated that the ministry has an avid investment plan of EGP 48 billion poured into the refining sector. While COVID-19 has skewed the ministry’s plans for downstream expansion with project delays, it was not permanently halted, and by the end of the year, most projects became active once again.

One of the most notable downstream projects of 2020 was the inauguration of the Mostorod Petrochemical Refinery at the Egyptian Refinery Company (ERC) with valued investments of $4.3 billion. The project was celebrated as one of the most important petroleum refineries in Egypt and Africa with a production capacity of 4.7 mmt of petroleum products per year. Mostrod’s expansion is essential in several manners, one of them is that it aims to decrease Egypt’s annual imports bill by $0.6 -$1 billion. It could also contribute to decreasing Egypt’s imports of gasoline and diesel by 35% paralleling that with an increase in diesel production by 30% and an increase in octane production by 15%.

Medhat Youssef, former Vice President of the Egyptian General Petroleum Corporation (EGPC), has previously stated that the Mostrod’s refinery will be a stepping stone towards exporting petroleum products. Youssef predicted that by 2023, Egypt will have enough gasoline and naphtha to export, and as it will secure these petroleum products on a national level. Mostrod’s project is not only a sustainable economic move, it is also an environmental one. Yasmine Fouad, Minister of Environment, praised the project as integration between energy, environment, and industry sectors, which is set to be one of the main elements for economic growth and a path to international markets.

Perhaps one of the biggest refining projects in Egypt is the expansion of Middle East Oil Refinery (MIDOR) which began in 2017 and rounded up investments of $2.2 billion by the end of 2019. The project is only 33.78% complete, however, due to the pandemic, the project faced several delays and was ultimately shut down as a result. The ministry stated previously though that MIDOR’s expansion will be completed in 2022. Several refining projects are being implemented and expected to be done in the upcoming years that includes; the Asphalt Production Unit at Suez Oil Processing Company (SOPC) and the Hydrocracking Complex and Production of Gasoline at the Red Sea Company in 2021 and 2022, respectively.

What’s more, one of the largest refining projects Egypt signed in 2020 was the $2.8 billion new hydrocracking complex for the Assiut refinery which was signed by Assiut National Oil Processing Company (ANOPC) and TechnipFMC. This project alone will contribute greatly towards Egypt’s self-sufficiency plan of petroleum products. As the project has a production capacity of about 2.8 mmt/y of diesel, 400,000 tons per year (t/y) of high-octane gasoline produced from naphtha and 100,000 t/y of butane, in addition to a production capacity of 300,000 t/y of coal and 66,000 t/y of sulfur.

Speaking of petroleum products security, it is essential to first examine Egypt’s petroleum intake and outtake. Per the ministry’s data, Egypt’s consumption of petroleum products reached nearly 30.2 mt/year of oil products in 2019, nearly a third of that was imported at $6.8 billion. Iskander remarked that “Egypt’s new refining capacities added recently or under construction from Cairo Refinery in Mostorod, Assiut Oil Refinery, Midor, and Alexandria Oil Refineries will accelerate Egypt’s self-sufficiency from diesel fuel, high octane fuel as well as jet fuel and butane.”

When it comes to trade, according to the Central Agency for Public Mobilization and Statistics (CAPMAS), petroleum products’ imports declined by 61% in June 2020 to $255 million compared to $654 million in the same month in 2019, while total crude oil imports amounted to $2.236 billion during H1 2020. Meanwhile, petroleum products’ exports amounted to $746.4 million, whereas crude exports amounted to $552 million in H1 2020. Taking into consideration that during the lockdown period that took place earlier in 2020, gasoline and diesel consumption decreased by 11,000 to 13,000 tons, and 21,000 to 25,000 tons, respectively.

Even though the pandemic has made unsettling changes in so many aspects of what we once knew as the ‘normal life’, life moves forward. The refining sector outlook for 2021 does not look so dull, Iskander believes that Egypt will achieve two main success, the first being “the additional refining capacity added that will contribute significantly towards achieving self-sufficiency within the coming few years.” The second success takes a more environmental approach which “is getting the sector to be greener and environmentally friendly by expanding in projects like the one financed by the European Bank for Reconstruction and Development (EBRD) to the state-owned Alexandria Petroleum Company (APC),” Iskander added.

Despite the challenges facing the world with no end in sight, the ministry still has a lot to offer for the downstream refining sector by focusing on the $8.5 billion refinery in Al-Alamein in the Western Desert, which is set to be completed by 2024. The complex is expected to process 2.5 mt/year of crude and condensate and export petroleum products. Another project underway is the $6.2 billion project at the Suez Canal Economic Zone with a capacity to produce up to 900,000 mt/year of refined products. The two projects are targeting to produce diverse petrochemical and petroleum products to meet the local market needs and export the surplus.

With the news of vaccines rolling around the world, it brings new hope of energy recovery to the scene. Deloitte certainly agrees as it expects oil demand to recover in 2021, but not enough to reach pre–COVID-19 levels—about 4% lower in the base case, and about 7% lower in Rystad Energy’s second-wave scenario.