Egypt’s Major Role Within A Global Portfolio: Interview with Mario Mehren, Chairman of the Board and Chief Executive Officer (CEO) of Wintershall Dea 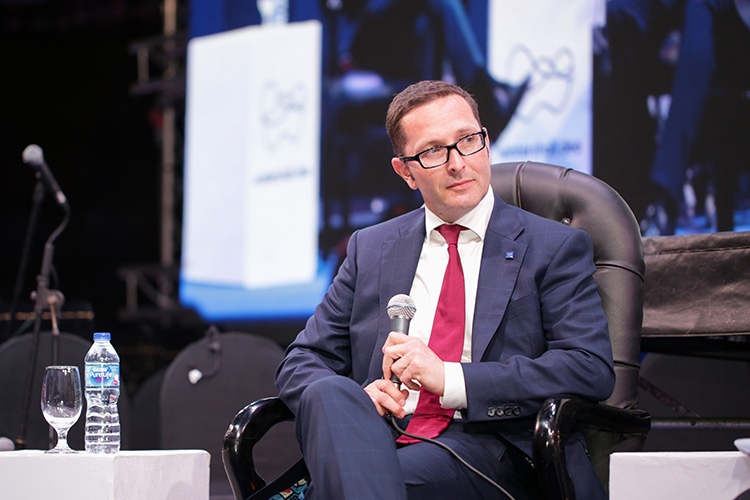 Ever since Wintershall Dea was officially formed in May, the company laid out ambitious plans for growth, including in Egypt, where it committed to invest $500 million over two years, building on a prestigious portfolio that dates back to the 1970s. Egypt Oil & Gas spoke to Wintershall Dea’s Chairman of the Board and Chief Executive Officer (CEO), Mario Mehren, during his visit to Egypt to discuss the company’s expansion strategy in the Egyptian market.

The Wintershall Dea merger created the largest independent oil and gas company in Europe. How does the new company differentiate and position itself in both European and Middle Eastern markets?

With the merger of two German companies steeped in tradition, we have created Europe’s leading independent gas and oil company. And we will continue our growth path. Over the next three to four years, we want to increase our global production from the current 590,000 barrels of oil equivalent per day (boe/d) to 750,000-800,000 boe/d, within our existing portfolio. This will happen primarily in Norway, Russia, the MENA region, and in Latin America. The larger Wintershall Dea now has the strength, know-how, and international presence to be competitive on the world market and is even more attractive as an operator and partner in licenses and projects for both, IOCs and NOCs. Wintershall Dea is big enough to be relevant and at the same time, we are independent, agile, and flexible enough for complex tasks. In short: We are smart, not just big.

Where does Egypt fit in the new company plans for the future? How significant is the Egyptian market in your global portfolio?

Looking at the world map, we now have activities in four regions and 13 countries: Our work extends from the Norwegian North Sea to the world’s southernmost production platform on the coast of Tierra del Fuego in Argentina, from the Siberian permafrost to the heat of the Sahara. Egypt plays an important role within our global portfolio. It has been one of the company’s core countries for decades. To be precise, we are active in Egypt since 1974. We have a solid portfolio in the country: Operated oil production in the Gulf of Suez, we are producing gas from our own-operated Disouq project, and we are partner with BP in one of the most important energy projects of the country, West Nile Delta.

We are glad that we were awarded an onshore exploration license during the latest bid round. We currently work with full steam on boosting our production significantly. Egypt currently ranks fifth in Wintershall Dea’s global portfolio in terms of production volumes, with the chance to become number four by end of the year, after the startup of the Raven field in the West Nile Delta.

Last year, DEA promised to double its production in Egypt. Do you still commit to this target?

As I said, we are working on boosting our production significantly and are committed to our targets. We are investing more than $500 million in our Egyptian assets during the period from 2018 to 2020. Currently, we are conducting an extensive work program in all own-operated assets. In West Nile Delta, we have now four gas fields producing and Raven, the biggest piece, is planned to come on stream during H2 2019. So yes, we are still committed to this target and on track.

Egypt is transforming into a regional energy hub and the center for natural gas trade in the East Mediterranean. How would that benefit Wintershall Dea, and what role can the company play to help achieve this strategic goal?

Indeed, Egypt’s oil and gas industry is developing impressively. Within a few years only, Egypt has turned from being an importer of natural gas to an exporting country. This was achieved, among others, through the reforms implemented in the country’s oil and gas sector and the swift development of large offshore gas discoveries, like Zohr and West Nile Delta, where we are involved.

The investment climate in Egypt improved significantly, and new options come up. As Wintershall Dea, we are set for growth on a global scale and are therefore looking for attractive business opportunities. I think that the Eastern Mediterranean region is under-explored when it comes to gas. It is an interesting region and Egypt is well-positioned to serve as an Energy Hub due to its well-established export facilities, which would offer convenient export routes. Therefore, I think the initiative taken by Egypt under the leadership of H.E Eng. Tarek El Molla to establish the East Mediterranean Gas Forum (EMGF), is very good. As a long-term investor and partner, Wintershall Dea will continue to support Egypt on this way.

There have been strong ties and cooperation between Egypt and Germany for decades. Is Wintershall Dea’s expansion in the Egyptian market a sign of the continuity of German investments in Egypt and the long-term partnership?

Wintershall Dea is one of the most important German investors in the country, and a long-term one. We are the only German gas and oil company in the country, but there are of course more business ties between our countries. Only a few weeks ago, a large delegation of the Egyptian Cabinet, headed by Prime Minister Mostafa Madbouly, visited Berlin, to meet with the German Federal Minister for Economic Affairs and Energy, Peter Altmaier, and to further strengthen the German-Egyptian business relations. This is good news.

You are planning an initial public offering (IPO) in 2020, are there any updates on the listing that you could share with our readers?

Yes, indeed, we are currently working hard to be IPO-ready by the mid of 2020. When the IPO will happen will very much depend on the overall market conditions at the time, both in terms of equity markets and commodity prices.

After almost 44 years of operations in Egypt, you appointed the first Egyptian country manager last year, and since you operate in 13 countries around the globe, how important is developing the local workforce?

I am happy that we have Sameh Sabry on top of our business in Egypt! Wintershall Dea needs the best employees for our challenging projects worldwide. We therefore invest in the knowledge and skills of our staff. Promotion of talent and the continuous development of the workforce where it is needed plays an important role for us.

We have also a special young talent program, where trainees gather practical experience in operational business at our different international locations, as part of a 1.5 to 2-year program. The program enjoys great popularity and the young talents are optimally prepared for a later international assignment with us.