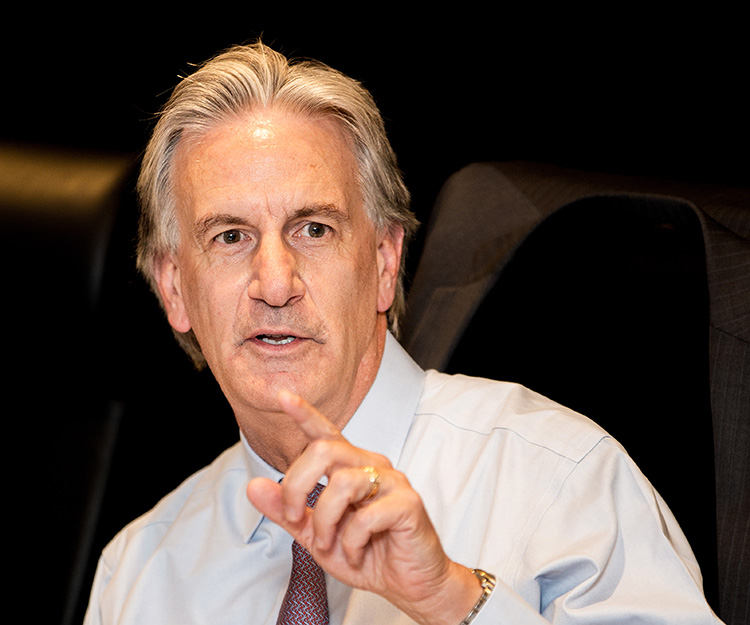 As the Egypt Oil & Gas (EOG) Technical Committee gears up for the 2018 Upstream Operational Excellence Convention, we had the opportunity to talk to Thomas Maher, the committee’s Chairman, and President and COO of Apex Egypt, to discuss about the committee’s vision, latest activities, and plans for the future.

could you comment on the eog technical committee’s vision and its role in the egyptian oil and gas sector?

The vision of the EOG Technical Committee is to unify the sector’s voice and to work in parallel with the government to enhance the well-being of the petroleum industry. We do this by bringing together exploration and production (E&P) companies, service companies, government entities, and leading industry experts under one roof to address the challenges the industry is facing, and to find potential solutions.

How do you feel about the outcome of the committee’s activities since its creation?

I believe the committee’s advocacy and activities have increased over time since its creation in 2013. The impact has been positive and continues to increase with an increased level of committee members and projects. The emphasis up until now has been on communicating best practices and technologies to others in the form of conventions, roundtables, and workshops. In the future, we are looking harder at jointly addressing specific industry challenges with our government partners via working groups, such as artificial lift and produced water handling, and publishing our conclusions and recommended solutions for the sector to benefit from.

With Egypt’s oil and gas industry entering a new era, especially in natural gas production, what are the committee’s future plans to help Egypt achieve its goals?

We are currently working on a plan with EGPC and EGAS to jointly address and propose solutions for a number of field challenges that currently limit production gains. Team leaders have been named for the four challenge areas, including 1) Artificial Lift, 2) Water and Waste Management, 3) Asset Integrity and 4) Agreements.  The committee is also providing technical support to the EOG Research & Analysis Team who are working on a compendium of historical Egyptian concession agreements to be released early in 2019.

In what ways does the Technical Committee cooperate with the Egyptian government to enhance the oil and gas sector’s performance?

I can give you three examples. The first are the Upstream Conventions we plan, organize, and help deliver with the support of the EOG Events Team. These conventions are used to support the Ministry of Petroleum’s Modernization Program, particularly where we focus on some of the program pillars, such as Investment Attraction, HR Management, Upstream Performance, and Decision Support and Data Flow. The second example is our Young Professionals Subcommittee who are planning a Young Professionals’ Day on December 4 in support of the Modernization Program’s third pillar, HR Management. Motivational speakers, live coaching sessions, and an oil and gas ideas workshop are being planned. The young professional participants will come from the Ministry of Petroleum, EGPC, EGAS, Ganope, and the joint venture (JV) operating companies. The third example is the Field Best Practices Workshop we planned and delivered at Qarun Field Base in September. This was a successful effort appreciated by the 80 attendees from the JV operating companies and led by EGPC CEO Eng. Abed Ezz El-Regal. We hope to continue offering these workshops twice a year at different JV’s in the future.

How do the companies involved in the committee collaborate to work for the collective benefit of the industry above the individual interests of each company?

I feel very fortunate that I chair a large committee of 35  like-minded and dedicated professionals representing many companies for the good of the industry. These unselfish committee members realize that as the industry improves, their individual companies are also likely to benefit. Most of the work is actually performed at the subcommittee level, who are responsible for our many activities, including the Upstream Convention, Field Best Practices Workshop, EGPC/EGAS Collaboration, Young Professionals, and corporate social responsibility (CSR).

The Technical Committee has recently launched the EOG CSR Subcommittee. What vision has driven the committee to elaborate a subcommittee focusing on CSR?

Yes, the CSR Subcommittee currently has 18 company representatives and had their inaugural meeting in September. The subcommittee is guided along consistent lines with Egypt’s Vision 2030 and the Ministry of Petroleum’s Modernization Program, allowing the sector to contribute to the country’s ambitions and developments. It is not the intention of the CSR Subcommittee to interfere with the good CSR work that the individual companies are doing in their areas of operations, but rather to seek group initiatives and projects that we can do together to benefit the community. We also plan to include the young generation into the subcommittee’s plans and actions, and increase CSR awareness to the young professionals in the oil and gas sector.

Could you comment on the CSR Subcommittee’s recent activities and future plans?

The CSR Subcommittee has decided to focus initially on four areas: Health, Education, Awareness Campaigns, and Long-Term Projects. We have formulated teams to study possible projects in each of these four areas. The Health team is currently looking into a sector-wide blood drive that will stress the importance of having an ample blood supply to the community at large. We hope to kick this off at the annual Egypt Petroleum Show (EGYPS) in February. We are also in dialogue with the Ministry of Petroleum on how the committee can support pillar seven of the Modernization Program: Decision Support and Data Flow. We would like to devise a web-portal to archive and make available to the sector the presentations from our conventions, roundtables and workshops, as well as other publications we hope to deliver in the future.

In your opinion, what are the Egyptian petroleum sector’s main challenges and what measures should be prioritized to overcome them?

I think the maturity of our Gulf of Suez and Western Desert fields require new thinking on fiscal terms that will increase the investment needed to increase crude oil production and reserves that Egypt needs. While upstream investment has been extremely strong in the offshore Mediterranean gas province, investment in the Gulf of Suez in particular, and also in the Western Desert, has decreased significantly over the past five years. While everyone is aware of the strong growth in natural gas in the Mediterranean as a result of increased investment, the same cannot be said of crude oil production from the Western Desert and Gulf of Suez.

The government has shown a real willingness to modify fiscal terms to attract an increase in foreign investment. Two recent examples are the upcoming Red Sea bid round that will have a new model form concession agreement tailored to high risk, deep water exploration, and in the mining sector following a year-long study by Wood Mackenzie based on global best practices. I believe this kind of thinking where fiscal terms are fit-for-purpose rather than one-size-fits-all is welcomed and consistent with the Modernization Program’s Investment Attraction pillar.

Given your experience in the sector, what do you consider to be Egypt’s most assertive move to boost its oil and gas sector’s performance?

I believe the paying down of the past dues or arrears owed to the many producers in Egypt has resulted in increased investment and a renewed confidence for new foreign investors to come in. Arrears have come down from $6.5 billion to about $1.2 billion at present with a promise by the government to pay all remaining arrears by the end of 2019. The result of that effort has seen the majors (Eni, BP, Shell) investing heavily in the offshore Mediterranean, increasing gas production, and the cessation of liquefied natural gas (LNG) imports and the resumption of exports by pipeline to Jordan and soon to Europe. I believe this has also resulted in new companies such as Apex International Energy, SOCO International and United Energy Group recently entering the sector. I suspect more foreign direct investment will be announced in 2019 when EGPC, EGAS, and Ganope bid round awards are announced.

The Ministry of Petroleum is also announcing large bid rounds over vast areas of Egypt and its waters, both in the Mediterranean and in the Red Sea, with more regularity. This is good for the sector’s future. Last, but not least, I am confident that the assertive move by the ministry to bring the sector up to global standards via the Modernization Program will also bear fruit in the future. The sixth pillar, Egypt as an Energy Hub, and its willingness to partner with Cyprus and Israel, is just one of the many pillars under this program that is attracting investment and creating jobs.