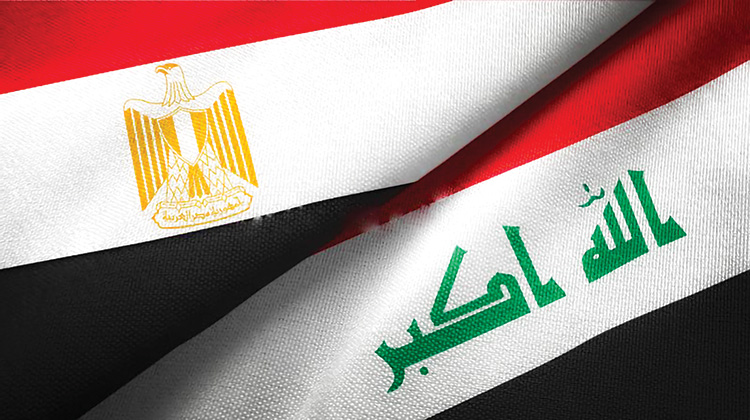 The historic deep-rooted relations between Egypt and Iraq have gained new momentum with the convening of the Egyptian-Iraqi Higher Committee in Baghdad last month. During the meeting, which was chaired by Egyptian Prime Minister Mostafa Madbouly and Iraqi Prime Minister Mustafa Al-Kadhimi, the two countries have reportedly reached a preliminary consensus to establish an oil-for-reconstruction mechanism.

During the meeting, the two countries have signed 15 agreements to enhance cooperation in the fields of transport, water resources, health, the environment, justice, investment, housing, construction, industry, trade, and finance.

However, many indicators refer to the oil and gas sector as the locomotive for this new era of cooperation between Egypt that seeks to be a regional energy hub and Iraq, the oil-rich country that seeks to upgrade decaying infrastructure and search for a safer route for its oil exports instead of the troubled Gulf waters.

An Alliance for Peace, Development

The new committee was a result of a political will that was declared during the Tripartite Summit between Egypt, Iraq and Jordan that was held in Cairo in 2019. During the summit, President Abdel Fattah Al-Sisi expressed Egypt’s desire to contribute to the reconstruction of the liberated areas of Iraq. In his remarks to the summit, President Sisi referred to the presence of many Egyptian companies and businessmen who have already worked in the Iraqi market, in addition to Egypt’s experience in the recent establishment of major national projects on the basis of mutual and balanced benefit.

During the summit, the three leaders agreed on the need to activate the mechanisms of bilateral cooperation that already exist between them; the joint committee was one of them.

In another tripartite summit in August in Amman, the leaders of the three countries tackled means to enhance joint trilateral cooperation in various fields, especially those related to energy, electrical connectivity, infrastructure and food.

During the Amman summit, President Sisi reiterated Egypt’s readiness to offer its experience and expertise in all fields to its brothers in Jordan and Iraq. He also stressed the importance of establishing joint development projects to be implemented according to a tight schedule to rapidly help improve the living standards of citizens and strengthening political and security cooperation paths.

Energy was the buzzword in many of the related meetings between the three countries.

In a recent meeting with Prime Minister Mabdouli and Minister of Electricity Mohamed Shaker, President Sisi directed the government to expand efforts of implementing more electricity interconnection projects with neighboring countries. The meeting focused on the latest development of Egypt’s megaprojects of electricity linkage with Sudan, Jordan, and Iraq.

In a meeting with the Iraqi Ambassador to Cairo, the Minister of Petroleum and Mineral Resources Tarek El Molla said that the Egyptian petroleum sector is ready to reinforce the presence of its companies in Iraq in the coming period with various oil, gas, and petrochemical activities.

El Molla’s remarks came at the same time Egypt announced that the agreement to import 12 million barrels (mmbbl) of Iraq’s crude oil is still active, noting that the six-month deal is renewed regularly.

It was also agreed to train the cadres in this vital industry and meet Iraqi needs.

The Iraqi ambassador said his country’s government is keen to boost bilateral relations and open new horizons for cooperation backed by the full support of the political leadership in both countries.

He stressed the importance of using distinguished Egyptian expertise, especially in the field of energy, noting that Egypt’s success, distinction, and experience will benefit Iraq at this important stage that is witnessing a shift towards investment, development, and reconstruction.

However, what looked really outstanding was the suggestion that was raised recently to establish a pipeline to transport crude oil from Iraq to Jordan and Egypt.

The project that was discussed during the Cairo Summit is going to breathe new life into an old project to send Iraqi oil to Jordan. Iraq and Jordan had signed an agreement in 2013 to build the pipeline from Basra to Aqaba, passing through Jordan’s only refinery in Zarqa near Amman.

The proposed pipeline had an initial capacity of 150,000 barrels per day (bbl/d) and had a cost of $18 billion. The project was due for completion in 2017, but it was not realized.

Commenting on the new proposal, the Jordanian Foreign Minister Ayman El Safadi described the revival of the pipeline project as a vital and strategic issue that benefits the three countries positively.

The pipeline is expected to allow the energy-thirsty Jordan to secure its oil needs in any quantity. It will also help Egypt, which has the largest refinery capacity in Africa, to consolidate its position as a regional energy hub.

However, the project may be a game-changer for Iraq, where the energy sector has been hit by military occupation and civil unrest in recent decades.

The project will have clear economic and political benefits for the country that seeks to recover from a war with Daesh terrorists and struggles to build its economy.

Even with the current price crisis, the proposed pipeline will offer Iraq an opportunity for more lucrative contracts in new markets.

For Iraq, the project is also providing a key alternative to its currently existing export terminals on the Arab Gulf. Thus, the Iraqi government views the pipeline in geopolitical terms as it will enable it to bypass any vulnerability in its Southern Gulf terminals or any potential closure of the Strait of Hormuz, hence fortifying the geopolitics in the region. Thus, the pipeline will save the Iraqi exports from any vulnerability in Iran or in Syria.

The new proposed pipeline is expected to be one of the pillars of the cooperation between Egypt and Iraq as International Cooperation Minister Rania Al Mashat said the political leadership in both countries have a strong will to eliminate obstacles hindering enhanced cooperation and achieving strategic integration at economic, trade and investment levels.

She unveiled suggestions to increase trade exchange and industrial cooperation, set up a logistics area along the Iraqi-Jordanian borders, establish a trade center for Egyptian goods in Baghdad, exchange data of exporters and importers, and secure free movement of Egyptian commodities into Iraqi markets and vice versa.

However, still the cooperation in the oil and gas sector seems the most encouraging, especially with Iraq, a country with nearly 145,019 mmbbl of proven crude oil reserves and  3,714 billion cubic meters of proven natural gas reserves, and where economic deterioration, military conflicts, and political turmoil have inflicted a blow to the development of its oil infrastructure, damaging its capability to generate national revenues from exports.