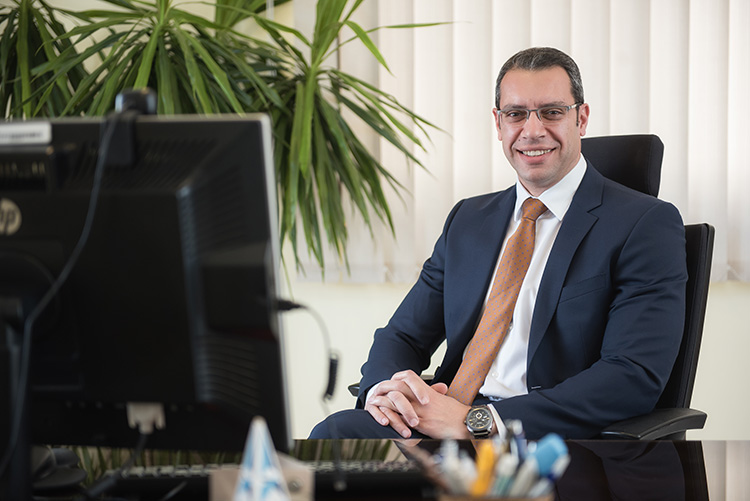 In August 2018, Deutsche Erdoel AG (DEA) welcomed a new country manager in Egypt. The Egyptian Sameh Sabry returned to his homeland and took over the role after a successful performance as general manager for DEA Algeria. Sabry talked to Egypt Oil & Gas and commented on his journey towards a management position, as well as on his views on the Egyptian oil and gas sector and DEA’s plans after the merger with Wintershall.

Could you introduce yourself and tell us about your career path?

I am an engineer, holding a Master of Business Administration and currently pursuing a Masters in Petroleum Engineering from Heriot Watt University. In the last 18 years, I have collected experience in the oil and gas industry – upstream as well as downstream. I had the pleasure to work for a number of multinational companies, starting with ExxonMobil, followed by Chevron. My current employer is DEA and it has been for the last 10 years. My international exposure focused on Europe and North Africa. I have been based in DEA’s headquarters (Hamburg, Germany) twice, where I worked for four years in two different roles.

There are not many people in your position at your age. Can you talk us through what it is like to be younger in an executive role?

First of all, I strongly believe that having the right set of leadership skills, long-term vision and being balanced between operational and strategical capabilities are the main decisive factors for success in similar executive positions – not age. Secondly, I am not that young anymore, although I might be slightly younger than the average age for similar executive roles.  This makes it easier for me to be flexible, dynamic and stay connected with the new trends in our industry. Whether it would be new technologies, digitalization solutions, or new approaches of leadership. Being middle aged makes me more down to earth and more accessible to junior colleagues, where I can benefit from their creative ideas as well as give senior experts enough space to maximize the company’s benefit of their expertise.

What challenges have you faced in your journey towards a management position and how have you tackled them?

The biggest challenge I faced in my career so far was being told – at every milestone in my career – that this would be the ceiling and I could not grow my career further because of my background or my age. However, if there is a will, there is a way! Persistence, continuous learning and self-development allowed me to expand my knowledge, increase my experience significantly in a short period of time, and enrich my role beyond job boundaries. The second challenge was continuously assuming roles outside of my comfort zone. In particular, when I was assigned to international roles; for example, being the commercial manager of DEA in Europe. Many suspected that I would have to struggle to maintain my level of performance being exposed to different business cultures and environments. However, I managed to keep my level of good performance and supported DEA’s senior management and its teams to develop a number of key projects in the United Kingdom as well as in Norway. Then, I assumed a role in a totally different region, as the general manager for DEA in Algeria during 2017-2018. In Algeria, I was proud to make a number of achievements (with partners) in a very short time. This career record allowed me to compete and then be selected in an open internal application process for the general manager position in DEA Egypt.

What is your personal advice to the young professionals who aspire for a career in the oil and gas sector?

Be ambitious, and never rest for less! Persistence and willingness to continue learning and developing yourselves is key for any career success. Believe in yourself and be positive. Do not get easily demotivated or frustrated when you face a challenge or when you have a failure. Keep trying and never give up!

You have recently joined the EOG Technical Committee. In your opinion, what role does the committee play in Egypt’s petroleum sector and how do you see your contribution as a member?

I am extremely glad to join the EOG Technical Committee. I see this committee as a ‘think tank’ for our industry in Egypt, where experiences are shared and new initiatives are created for the benefit of the industry, our companies and ultimately Egypt. In this committee, we try to distance ourselves from the narrow individual benefits of our companies to the overall benefit of the industry. We focus on initiatives and projects which would support the modernization program led by the Ministry of Petroleum. For example, we organize workshops and conventions for sharing best field practices, innovative projects, new technologies and HSE initiatives. We recognize achievements and award individuals in all disciplines of the industry. Additionally, we have started a collective move for corporate social responsibility (CSR) projects.  Any of our companies, whatever its size, would not be as influential and effective as having a collective committee representing the international and private oil and gas companies in Egypt.

What do you hope to achieve as general manager of DEA Egypt?

My aspirations for DEA in Egypt are unlimited. My vision is to gradually grow DEA’s portfolio and activities in Egypt to a level which would make it one of the top oil and gas producers in the country. In the short and the mid-term, I will be focusing on maximizing the value of our existing operated assets in both the Gulf of Suez and Disouq, as well as our non-operated assets in West Nile Delta (WND). In the longer-term, I personally believe that Egypt offers an excellent growth platform for DEA through assets acquisitions as well as exploration activities.

You were previously general manager of DEA Algeria. How does the Egyptian oil and gas market compare to the Algerian?

Both Egypt and Algeria share many similarities in their oil and gas market. Both are countries with long-term experiences in oil and gas, both have skilled labor forces, professional state companies as well as national oil and gas infrastructures.  While Algeria has recently announced plans to amend the Algerian hydrocarbons law to increase flexibilities and incentives granted to foreign investors, Egypt is ahead in modifying contracts and amending its laws to attract foreign investments. Domestic demand for petroleum products is much less in Algeria than the case in Egypt, which relieves the Algerian state companies from carrying similar financial burdens as carried by their Egyptian counterparts.

How does DEA’s merger with Wintershall affect its commercial and business development?

BASF and LetterOne have signed a definitive transaction agreement to merge their respective oil and gas business. Accordingly, Wintershall and DEA Deutsche Erdoel AG will become one company, following acquiring the required legal approvals. The new merged company, Wintershall DEA, will form the largest independent exploration and production (E&P) company in Europe with ambitious growth targets. To allow for achieving those growth targets, we expect the new company to be active in the mergers and acquisitions of new assets worldwide as well as exploration in new blocks. We expect the new company to evolve rapidly into a world-class and globally competitive organization with an international portfolio.

What new ground will DEA be able to cover in Egypt once it has merged with Wintershall? Will this change the timeline of DEA’s plan to double its Egypt production?

DEA plans to double its production from current existing assets in Gulf of Suez, Disouq and DEA’s share in West Nile Delta within a couple of years. This will stay unchanged following the merger. Nevertheless, the merger will unlock synergies, provide for additional resources, capabilities and will provide the new merged company with the scale needed to access important new opportunities. All this will enable us to be more active, as well as seek further growth in Egypt.

The industry is diverse in different ways. How do you see diversity in the oil and gas industry?

Diversity in our industry extends not only to its key part of gender diversity, but also extends to diversity in races, colors, nationalities, ethnicities, religions as well as personal beliefs. On my very first day in DEA Egypt, as the new general manager, I have gladly signed DEA’s Diversity Mission Statement and invited my fellow colleagues in DEA Egypt to sign it as well. In DEA, we are proud to have a female CEO, who is inspiring the whole organization on the needs and benefits of diversity. In November, DEA is organizing its first DEA Women Summit, where all females in DEA worldwide will gather in one place and meet the board and the executive team of the company. I think we need to encourage a higher involvement and equal opportunities of females in the Egyptian oil and gas sector. We have to continue to put more effort into this important subject since we want to attract the best talent for our company.

What does DEA’s CSR program in Egypt entail?

DEA Egypt is very active in CSR activities, particularly in the regions where we operate oil and gas fields, in Gulf of Suez as well as in Disouq. Recent examples of CSR activities include the “Ophthalmia Convoy”, a medical convoy that DEA Egypt has been organizing and supporting in the Abou Redis area near our oil fields in Ras Budran in the Gulf of Suez. DEA worked together successfully with the Misr El-Kheir Foundation to organize this. Additionally, a similar medical convoy is planned this year in Kafr El Sheikh close to our Disouq gas fields. In the Gulf of Suez area, DEA celebrated the orphans’ day together with SUCO, where hundreds of orphans between 4 and 16 years of age have received toys and books as gifts from DEA Egypt. In addition to this, we actively finance (proportional to our participating share) the CSR activities in Idku in the vicinity of the West Nile Delta with our operator BP.