A New Cold War, or an Election Ploy? 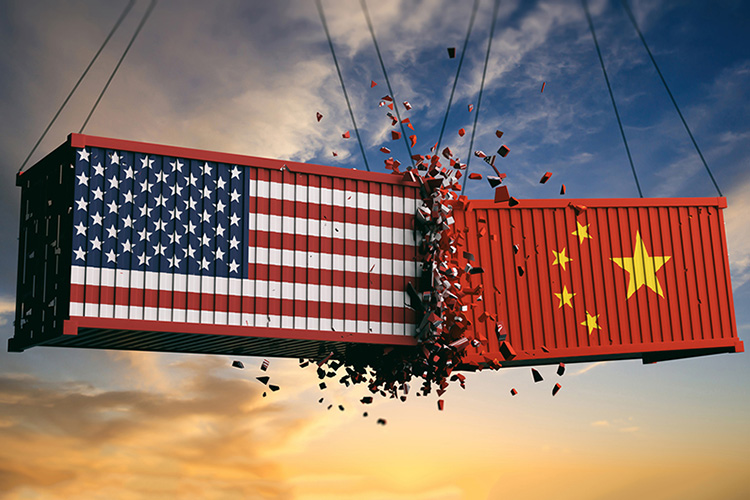 As the world struggles to contain consequences of the COVID-19 pandemic, an escalating trade war rhetoric between the US and China seems to add insult to injury for the global economy.

The new escalation began with a trade of accusations between US President Donald Trump and China over the coronavirus where the US president said he was very disappointed with China’s failure to contain COVID-19, explaining that the pandemic had cast a pall over his January trade deal with Beijing and that he had no interest in speaking to President Xi Jinping at the moment.

The prospects of the trade war have triggered sell-off in global financial markets and spread fears among investors that a renewed US-China trade conflict could inflict additional damage for global growth, while the world is heading for the worst recession since the Great Depression in the 1930s.

The protracted conflict between the two superpowers, which started in 2018, had reached a turning point in January 2020 with the signing of phase one of the trade deal. However, the deal failed to have any effects on the global economy due to additional tariffs imposed by both China and the US.

The US has continually accused China of unfair trading practices, including intellectual property theft, forced technology transfer, denying market access for US companies in China, while China believes the US is determined to restrict the dragon’s rise as a global economic power.

With the emergence of the pandemic, relations between the two powers plunged to rock bottom as the US president even threatening to “cut off the whole relationship” with China. He even tended to raise China’s anger by calling the coronavirus the “Chinese virus” and threatened to seek compensation from China for the damages caused by the outbreak.

The novel coronavirus crisis has really encouraged both countries, already reeling under trade, technology and maritime disputes, to take a more hostile position towards each other as Beijing accused the US of pushing relations towards a “new cold war”.

A New Cold War in the Making?

According to media reports, China’s top leaders have already received a report from the Ministry of State Security stating that hostility in the wake of the coronavirus outbreak could tip relations with the US into confrontation. Many analysts referred to the report as China’s version of the ‘Novikov Telegram’, referring to the report that Nikolai Novikov, the Soviet Ambassador in Washington, sent to Moscow in September 1946, laying out his analysis of the US conduct and ushering for decades-long cold war that brought the world to the edge of nuclear confrontation several times.

However, many analysts see that if the US-China trade war really develops into a broader cold war, it will be nothing like the first Cold War as the US and the Soviet Union never had a chance to develop a significant economic relationship before things hardened into a stark East-West divide.

The question today will be how the US can launch such a war against the world’s largest exporter of merchandise and the second-largest importer of both goods and services. China has also become the largest exporter of intellectual property-related services among middle-income developing countries. Furthermore, China emerged as one of the top two or three countries as both a source of and host to foreign direct investment.

Besides, China is the third-largest trade partner for the US itself and a major supplier of US consumer goods.

It seems that the new cold war between the US and China is a different kind of competition with different terms. However, it is not less dangerous. The struggle is expected to be more complex and multi-dimensional as the US and China are intimately entangled in many terms.

Some analysts expect that a full-scale cold war between US and China could trigger a new stage of de-globalization, or at least a division of the global economy into two incompatible economic blocs where others should make their choices and bear the consequences.

A Weapon that backfires

The most wielded weapon in this war until now was the imposition of tariffs. Trump’s tariffs policy aimed to encourage American consumers to buy local products by making imported goods more expensive.

But it seemed that the trade war has partly backfired on both nations.

While trade war tariffs directly hurt targeted firms and sectors in US and China, they indirectly affect stock prices through global value chain linkages in the US, China, and in other countries which do not directly participate in this trade war.

A research, published on the economic portal VoxEU, found that US tariffs boosted share prices of some US companies by up to 7%, but cut the value of others by up to 2%. Looking at China, tariffs imposed by Beijing had a similar negative impact on domestic firms as well as US companies.

Another research by the US Federal Reserve found that Trump’s tariffs had led to job losses in the industrial sector and higher prices for producers and consumers.

With the prospects of losses in the horizons for everyone, why should President Trump be insisting to go on with the cold war rhetoric against the Asian giant?

For many experts the conflict may be politically motivated.

They see that coronavirus cannot be the real reason for the new attack by Trump who cannot win another term under distressed economy.

The economy, which was known to be Trump’s greatest political asset, has become his biggest weakness as unemployment is spiking at an unprecedented rate, while consumer spending is vanishing and the gross domestic product (GDP) is collapsing.

With coronavirus casting shadow over any hope to fix the situation anytime before election, being tough against China may help Trump to please his supporters. Still we have to wait and see if this will be enough for him to be reelected.The trade war has negatively impacted the economies of both the US and China. It has led to higher prices and economic difficulties for the US farmers and manufacturers . While in China, economic growth has slowed to its lowest in decades. In other countries it has also caused economic damage, though some countries have benefited from increased manufacturing to fill the gaps. It has also led to stock market instability. Governments around the world should now ponder steps to address the expected damage caused by the economic conflict.

And even as many countries are trying to hedge, the choice for neutrality or non-alignment seem to be very narrow this time.