THE AMAL PROGRAM: BRIDGING THE GAP BETWEEN EDUCATION AND INDUSTRY 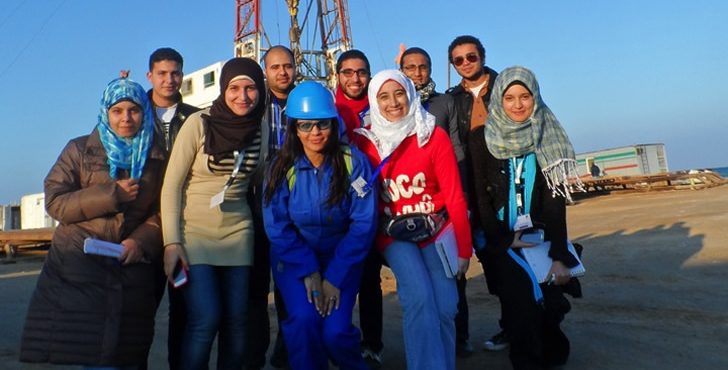 Their slogan is Gain and Give, and they are practicing it every day as part of the Amal Program. It is an apt description for what the program hopes to achieve. Dr. Samir Abdelmouty, the program’s founder and director, explained that the program was born out of a realization that there was a training gap between universities and international oil companies. “Smart graduates are out there and they are qualified, they just need a little help to fully realize their potential,” said Abdelmouty.

He went on to explain that about ten years ago, the pool of geologists and those with petroleum related degrees was expanding in Egypt even as it was contracting internationally. Young people were graduating from Egyptian universities with degrees sought after by major energy firms such as Shell and BP, but they did not yet have the necessary skills to obtain jobs with these companies. The local market was flooded with jobless graduates even as these degree-holders became scarcer on an international level. Dr. Abdelmouty reasoned that he could provide a solution, and the Amal program was born.

Samir Abdelmouty has had a long and successful career in the petroleum sector. After graduating from Cairo University in 1972, he started out as a young engineer in the Gulf of Suez Petroleum Company (GUBCO). Abdelmouty speaks nostalgically of his time at GUBCO, which he credits as one of the most defining elements of his career. “The 1970’s were an exciting time to be at GUBCO. It was the place to be for exploration in Egypt.”

After years working in various companies all over the industry, Abdelmouty eventually moved to BP, where he served the company for nearly 20 years, moving to a number of different posts all over the world before returning to Egypt. He currently heads up Beach Energy’s operations in Egypt.

When Abdelmouty first started thinking about the idea of the Amal program in the mid-2000’s, he approached longtime contacts at Apache, BP, and Shell to see if they would be interested in supporting the program. The companies agreed to the soundness of the idea, and have continued to provide training and monetary support to the effort ever since.

The idea of the program could be summed up as this: There is a gap between training received at universities and those needed by IOCs. The Amal program was conceived to bridge that gap by partnering with the two entities and helping develop top students into exceptional employees.

Abdelmouty started by reaching out to the top four universities in Cairo and asking their geoscience and petroleum engineering departments for the top three graduates from each department. Those who were not currently employed (as this is a jobs program, employed graduates are not eligible) were interviewed for their technical background, business acumen, and their enthusiasm for such a program.

The current structure for selectment is largely the same as how Abdelmouty started eight years ago, only the scale is different. Expanding from the original four university partners, Amal now has twelve and they are not just in Cairo, they are located all over Egypt stretching from Alexandria in the north to Aswan in the south. One of the program’s goals is greater diversity, and by reaching beyond the capital, Amal is finding talent all over the nation.

The program does not simply strive for geographic diversity, but also recognizes that gender diversity is a big issue in the oil and gas industry. They try to maintain roughly equal numbers of men and women in the program. Like their male counterparts, female graduates have used the Amal program to launch successful careers in IOCs. “The first Egyptian female engineer to work on an offshore rig in the country graduated from Amal,” Abdelmouty stated proudly.

Due to the high number of applications (they received nearly 300 last year), all the candidates are first screened through an online test that is a mix of technical, I.Q., and industry knowledge questions. Successful applicants are then interviewed by Dr. Abdelmouty and previous graduates of the program.

Currently the Amal program has a capacity for 40 total students. Once the interviews are complete and invitations to the program extended, the real work begins. All the participants begin by attending technical sessions in classrooms that are rented for the program by Amal, or donated by its sponsors. Through its partners, Amal brings in volunteer experts from oil firms, service providers, and contractors who typically teach four-hour sessions each. Sometimes the sessions are split in two for less-intensive subjects. The Amal program is based around the concept that there is no substitute for experience, and by reaching out to experts, students gain information that is more up-to-date than anything they learned in their universities.

Training sessions continue for four hours a day, four days a week. But the other hours of the day are far from wasted ones. In the morning, before the afternoon training sessions, students alternate between Business English classes and working on their own presentations. Improving Business English was an important point for Dr. Abdelmouty. Without at least moderate English skills, many talented young engineers and geologists go undiscovered by international firms.

The Business English program was custom-designed for the Amal program, and all the candidates go through the course before graduating. AUC and Berlitz have alternately been language partners with Amal.

Perhaps the most important part of the entire Amal course is what Abdelmouty terms, “the soft skills” sessions. These focus on etiquette and presentation-making, attending meetings on time and wearing proper attire. They attempt to teach students all the skills necessary to succeed in large international companies. While some of these skills seem basic, they are far from a given to many Egyptian students.

“If you have never made a powerpoint or presented a project, it is much harder to succeed in a business environment. You could have the best idea in the world, but if you do not present it well, it will never happen,” Dr. Abdelmouty explained. It can be difficult for someone used to living in Egyptian culture to adjust to other cultures or norms. However, the goal of the program is to allow graduates to be hired by international companies that might send them anywhere. The Amal program attempts to minimize the adjustment needed for graduates to succeed in environments outside Egypt.

All students make at least two major presentations during their time at Amal, which gives them practical experience they may not have learned during their university studies.

Another major theme for Amal is safety. “Safety is absolutely critical in the oil and gas industry. Everything we do is predicated on safety, and those wanting to join major firms need to learn that,” said Abdelmouty.

The theme is a major focus for the program because the idea of actively seeking and planning for safety is not prevalent in popular Egyptian culture. People rarely even wear seat belts when driving, so rig or operational safety is not necessarily on young Egyptian minds when they start working for a large company. Amal even touches on office safety, such as stopping for breaks during the day and being proactive about carpal tunnel. The training stresses “Do not learn safety by accident!”

Training sessions, presentations, and English studies are interspersed with special field trips. The trips are organized to give students first-hand knowledge of drilling rigs, geological formations, and oil discovery platforms. Groups have gone to a wireline logging yard for Schlumberger, an onshore oil platform at El-Megawish, and observed complex geologic structures in Ain Sokhna.

The program invites various experts from large firms to come along and serve as a guide for the students. Professionals passionate about their work have proven eager to show students their areas of expertise, getting students excited in the process.

Previous graduates of the program come back year after year, contributing to the latest version of the program. This is something that Abdelmouty and the entire steering committee value very highly. It embodies their stated ethos of synergy, diversity, and volunteerism.

After the 3-4 month program ends, graduates are exceptionally well qualified for the local job market. After Amal 1, the first year of the program, all 19 graduates were hired within three months. Successive rounds have likewise proven highly successful for launching young talent to careers in the oil and gas industry.

Young graduates of the program have been hired at leading companies such as BP, Shell, Halliburton, Schlumberger, and many others. Some students have chosen to give back to their communities through accepting teaching positions at local universities.

The program plans to expand in the future to other countries and regions, but for now, the Amal program is really the “hope” of the Egyptian industry!