Paris Climate Change Conference: The Urgency of a Difficult Deal 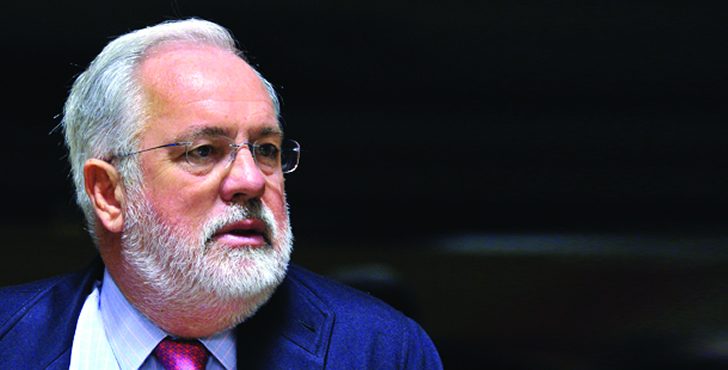 Interview with the EU Commissioner for Energy and Climate Action, Miguel Arias Cañete

An orchestra’s work is never easy, it is quite a challenge to coordinate so many instruments to create even the simplest melody. Between the 30th of November and the 11th of December, the leaders of over 200 countries will gather in Paris with a similar challenge, to coordinate their efforts in engaging the challenges of climate change, and hopefully, unifying their tune.

In a city trying to recover from several horrendous terrorists attacks, amongst high security measures, the UN Paris Climate Change Conference, referred to as Cop21, will be held. Key officials from all over the world will sit together under one roof to reach a deal, an agreement to reduce global greenhouse gas emissions (GHG), and a commitment to address the threat of climate change.

In an effort to get an insider’s view of what the world can expect, Egypt Oil & Gas reached out to one of the world’s most accredited voices, the European Union Commissioner for Energy and Climate Action, Miguel Arias Cañete, to discuss the possible outcome of the conference.

He began by explaining that climate change represents one of the biggest challenges to our planet and its inhabitants. Raising sea levels, droughts, floods, and extreme weather conditions that are already affecting many communities around the world, threatening the livelihood of millions of people. “Science is very clear on the threat that climate change poses. If we want to palliate the most extreme consequences of global warming, we need to act urgently and decisively now,” says Cañete.

According to the widely accepted theory, if the emissions continue in the current progression –heading to a rise of about 5 degrees Celsius (5C)– there will not be a way back from global warming. That threshold is estimated as a temperature rise of 2C above pre-industrial levels. It does not sound like much, but as The Guardian published, the temperature difference between today’s world and the last ice age was about 5C. Small changes can mean big differences for Earth.

Even though, sadly, according to Gallup data, about 40% of adults worldwide have never heard of climate change. This rises to more than 65% in some developing countries, like Egypt, Bangladesh and India.

For the Commissioner, “the urgency of the situation requires world leaders to be ambitious and courageous. We need to capitalize on the momentum reached in the climate negotiations to adopt a comprehensive, robust and ambitious agreement for the future.”

When asked if he believed that COP21 is the last hope to save the world from catastrophic climate change? Cañete replied “I am confident that together at Paris, we can transform the challenge of climate change into a unique opportunity to address global warming effectively. For the first time in two decades, we are witnessing a shift from a process where only a few participate to one where everyone commits to address climate change.”

To illustrate this point, whilst under the Second Period of the Kyoto Protocol, 35 countries representing about 14% of global greenhouse gas emissions, adopted emissions reduction targets, today over 160 countries, representing around 93.5% of global GHG emissions, have submitted their Intended National Determined Capabilities (INDC) to cut emissions. The INDC process is a remarkable success story in itself that signals the seriousness that national governments attach to the fight against global warming.

In fact, according to an expert consulted by Egypt Oil & Gas, real progress has been made regarding the intended nationally determined contributions (INDCs). Almost 80% of the world have come forward with their intended commitments in the context of the Paris Agreement. This is a clear commitment by many to a multilateral climate regime that includes action by all states.

On the same line, according to what UN Climate Chief, Christiana Figures, said in an interview with Deutsche Welle, “it is the last opportunity to do so in a cost effective manner. Global greenhouse gas emissions in theory could continue to increase over the next few decades; but then, we will have no other option but to reduce global greenhouse emissions at a much higher cost.”

When asked about the obstacles that could impede reaching an agreement, Cañete admitted that although huge progress has been made since the COP15 negotiations in Copenhagen in 2009, a gap remains between the political and the technical process that needs to be bridged. “Over the last weeks we have worked to overcome part of this gap during meetings held in Bonn and Paris, where we have advanced on the draft agreement. The package that we will work on during the COP21 negotiations in Paris is now starting to take shape, but there are too many options on the table and many key issues remain unresolved,” he said.

Cañete believes that a good agreement should include a long-term goal, a common vision of the place where we want to go. It should also include clear transparency, and accountability rules that provide credibility to the agreement. “We are in favour of including a mechanism that helps us increase ambition over time. This mechanism should allow countries to come together every five years to take stock of the progress made, see whether we are still on track of meeting our targets, put us back on track if we have deviated from our path, and identify areas where we can increase our levels of ambition over time,” explained Cañete.

More specifically, talking about money, the International Energy Agency (IEA) concluded in its annual assessment of markets that the plunge in oil prices risks undermining efforts, and if crude remains around $50 a barrel until the end of the decade, conventional fuels would hold back the development of electric cars, and biofuels that are helping curb carbon emissions, Bloomberg reported.

The IEA report states “lower oil prices alone do not have a large impact on the deployment of renewable energy technologies in the power sector, but only if policy makers remain steadfast in providing the necessary market rules, policies, and subsidies.”

Determination is for sure a must. Questioned about the importance of climate change in EU’s agenda, the Commissioner was clear “Addressing climate change has been and remains a key priority. We remain committed to provide our share of climate finance – the largest amongst developed countries – to assist developing countries in their efforts to curb global GHG emissions.”

Egypt Oil & Gas asked about when the movement towards low carbon economies started to become a priority for the European Union. Cañete replied “since 1990, the European economy has grown by 46% and at the same time, the EU has reduced our GHG by 23%.” In his opinion this shows that climate action and economic development can go hand in hand. He added “we are also well on track to meet our 2020 targets, through which we seek to reduce our GHG emissions by 20% (with regard to 1990 levels), to increase 20% in the share of renewable energies in our energy mix, and to improve by 20% our energy efficiency. We have also approved our 2030 energy and climate strategy, committing ourselves to reduce our GHG emissions by at least 40% (compared to 1990 levels), to increase the share of renewables in our energy mix to at least 27%, and to increase our energy efficiency by at least 27%.”

And what about Egypt? How is the country facing the challenge? At this point, the Commissioner welcomed the submission of Egypt’s national plan, its INDC, setting GHG emission reduction targets; pointing out that the EU and Egypt have worked closely together with other Mediterranean partners to foster renewable energies (RES) and energy efficiency (EE) in the Mediterranean region.

Egypt has set itself an ambitious strategic target to increase the use of renewable energy and the country’s energy efficiency. Egypt’s potential is renewable energies is huge, in particular in solar energy, wind energy, and biomass generated energy.