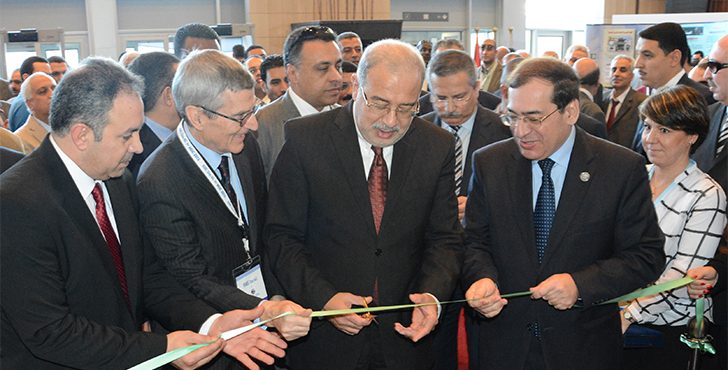 After a two-year hiatus due to recent political instability, the MOC made a successful return to Egypt, attracting thousands of delegates and presenting 72 papers. “It proves the industry is ready again to face new challenges and contribute to the improvement and enhancement of the world’s energy resources,” said El-Molla.

“Many people say the oil and gas era is over,” continued El-Molla, “We are seeking to secure our oil and gas needs, but we still believe the resources in the current reservoirs are much less than the actual potential,” adding that regional players should, “encourage exploration efforts in deep and ultra-deep water in the Mediterranean Sea, as well as Aqaba Gulf, the Red Sea and the Western Desert.”

This year’s MOC played a vital role in assuring investors that Egypt has regained stability. Some of the challenges facing the industry include aging infrastructure, sluggish foreign investment, an increase in energy consumption, and difficulties in meeting the rising energy demand. Minister of Petroleum and Mineral Resources Eng. Sherif Ismail sent a clear message to all attendees that Egypt is committed to overcoming the current limitations and invited all to join in the efforts.

The Offshore Mediterranean Conference (OMC) chairman also touched upon issues of affordability and availability. “Experts expect demand for fossil fuels to increase,” said OMC Chairman Innocenzo Titone, with natural gas projected to see the highest growth. For this reason, collaboration between key players in the Mediterranean region is necessary. “Egypt’s strategic location in the region allows it to play a key role in the region’s energy industry,” Titone concluded.

Eng. Sherif Ismail expounded the government’s initiatives to tackle the energy crisis. “Today’s conference aims at strengthening the exchange and cooperation among Mediterranean countries,” said Ismail in his opening statement. At the moment, Egypt is undergoing a crucial transition to fulfill the needs and expectations of the Egyptian people, including a journey towards a modern democratic state, a higher standard of living and greater job opportunities.

“Our energy mix is uneconomical, highly unreliable and definitely unsustainable,” stressed Ismail referring to the gap between energy supply and demand. Egypt relies on oil and gas for 91% of power generation, as compared to the 61% of global reliance of hydrocarbons for power generation. In the upcoming years, Egypt’s reliance is expected to increase to 94%. “We must diversify our energy mix, ” he concluded.

Ismail urged key oil players to take action against growing consumption and in guaranteeing an adequate playing field for the industry to flourish. Finally, Ismail called upon all international operators to invest in Egypt to create an energy hub of great potential, ready to face new challenges. Egypt has signed 56 concession agreements in the last two years – 36 of which have been ratified and 20 are new agreements – with a total investment of $12 billion, to drill 250 new exploration wells.

Part of the minister’s goal of increasing production consists of the endeavours in shale gas exploration. The EIA estimated that Egypt has 536 tcf of technically recoverable shale gas. The minister has made it a government priority to recover these reserves by employing the latest technologies. Finally, the government has recently opened four basins in the Western Desert for shale gas explorations, according to the plan to unlock Egypt’s potential. The minister also stated that LNG imports, due to arrive in March, are expected to exceed the 500 mscf in the next five years.

Tarek El-Molla – Chairman, EGPC
“The MOC 2014 reinstates that Egypt is back, and that our oil and gas industry is back to its position. Egypt is committed to its investors and partners with full commitment of necessary reforms to meet the required investments environment.”

“The aim of the conference is to strive, incentivize and motivate the partners to work with us to optimize the current stranded oil and gas in Egypt that we can possibly get out of our land. Through innovative ways and high technologies, coming from our partners, key players will help us see some of the potential that we do not currently see.”

“We [the government] are sending a message loudly in MOC 2014 that we are here and ready for the bid rounds.”

“Egypt is becoming a net importer, we need to optimize and maximize our local production to reduce the imports. Of course, with the decline of the crude prices now, this will definitely change the economics of the industry.”

“Collaboration with foreign investors will be possible with our support, we as the Egyptian oil and gas industry, and the electricity and power authority. “

Innocenzo Titone – Chaiman, OMC
“The last MOCs have been very fruitful and this one is a good sign that Egypt is stable from an energy sector’s point of view.”

“The new discoveries of substantial oil and gas reserves in the Levant Basin show the potential of becoming important suppliers to satisfy Europe’s demand for hydrocarbons.”

“Egypt has got the infrastructure and the adequate lines to meet the current challenges it’s facing. There is potential.”

Jean-Pascal Clemencon – Managing Director, Total E&P Egypt
“In such times, with all that is affecting the oil and gas industry in Egypt, it is a good sign to see many industry professionals this year at the MOC. It says everyone is interested.”

“At the launch conference, Eng. Sherif Ismail gave a very factual presentation; it was detailed and showed good analysis. He showed that the government knows where the problems lie as well as their solutions. These solutions are not easy to achieve, but they are feasible.”

John Evans, Managing Director, Fugro
“The MOC this year is very good. The turnout came as a pleasant surprise. The exhibition has been very busy and we have had many visitors in our partition. It is a great opportunity to make contact with potential customers and to engage in discussions with other players in the field. The organizers have also done a great job with the layout. It is practical and highly functional.”

“The government is showing more lenience. That will help improve the current situation and create a more investment-friendly environment.”

Ahmed Shoukry – Country Manager, Weatherford
“The venue this year is great and the organization is much better than the last years. We appreciate the minister’s efforts and transparency, it’s a giant step on the right path.”

Maximilian Fellner – General Manager, RWE Dea
“It’s a good occasion to meet our partners, to meet the service companies providing us services and products. It was about time to have another MOC in Egypt again.”