LOW OIL PRICES AND THEIR IMPACT ON NON-OIL SECTORS 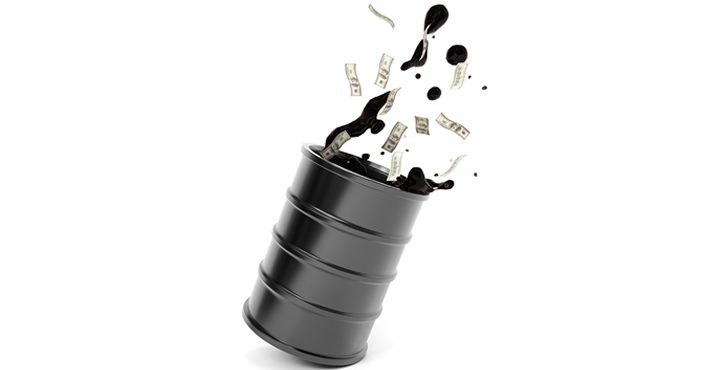 With oil prices still low, and many oil and gas companies laying off thousands, the oil downturn is marking a significant turning point in the energy industry, and the non-oil sectors have been affected as following:

Falling delivery costs for Powder River Basin (PRB) coal could displace additional amounts of Northern Appalachian (NAPP) coal in the East/North Central and South Atlantic regions of the United States. Lower diesel prices are resulting in declining US coal transportation costs and select basins will be able to capture a portion of this cost reduction. PRB mines will realize the largest proportional benefit, as transportation costs account for a large proportion of delivered costs. However, the impact of lower delivery costs for NAPP coals will be offset by marginal demand reduction in the East North Central and South Atlantic regions.

If oil prices remain below $70 per barrel for several years, up to 2.5b cf/d (or around 20%) of associated gas volumes could be at risk by 2019. Lower crude oil and natural gas liquids (NGL) prices will erode North American rich-gas play economics and lean-gas development could accelerate if producers shift away from rich-gas plays. But despite current low prices, drilling is expected to continue in the most productive plays in 2015 as service companies are expected to cut costs and producers target the highest returning areas and leverage existing infrastructure to lower costs.

Growing shale gas production between 2010-2014 depressed North American gas prices. Coupled with then-rising oil prices, the oil-gas price differential widened and North American gas feedstocks gained a competitive price advantage over European and Asian oil-based feedstocks. This was a boon to North American companies highly leveraged toward gas-based chemical production, resulting in $135b worth of planned investment in new export-oriented production capacity. However, falling oil prices since mid-2014 have caused the oil-gas price differential to narrow once again. The North American gas price advantage has reduced, putting some planned projects at risk of being shelved. This will cause investors to reconsider the risks of investing in North American gas-based chemical projects. Many new chemical investment decisions will likely be delayed until there is more clarity around the sustainability of falling crude prices.

A Master Limited Partnership (MLP) is a limited partnership that is publicly traded on an exchange. It combines the tax benefits of a limited partnership with the liquidity of publicly traded securities. Energy MLPs derive most of their revenue—around 90%—from the production, processing, and transportation of natural resources. MLPs are a unique type of business and are traditionally structured to provide stable, growing income streams for their unit holders. They are under pressure to maintain and continue their distribution growth, even through market downturns. The oil price collapse since mid-2014 is challenging the ability of North American midstream MLPs to provide stable revenue growth from their core transportation and distribution businesses. Expected near term growth rates of natural gas, oil, and NGL production have reduced, lowering revenue growth. In light of prevailing low prices, two of 2014’s top 5 midstream MLPs by market cap have converted or are converting from MLPs to conventional corporations. Another is turning to optimization activities to boost revenue.

Low oil prices have contributed to lowering the price of marginal coal tonnages into Europe and will also feed-through to lagged oil-indexed European gas contracts. Competition between coal and gas in Europe’s power sector, and the price levels at which fuel switching takes place, will be crucial in shaping the development of commodity prices, both this year and into the medium term. As fuel prices change, the differential cost of producing power from coal and gas will shift, although low European carbon prices will continue to offer coal an advantage. But, in the UK, where uplifted emissions costs have far greater impact on generator’s economics, fuel switching dynamics in the power sector are quite different due to the UK carbon price floor.

Sustained low oil prices could prompt European integrated majors to rationalize weak, stand-alone refining sites. As their financial flexibility to withstand losses in this sector declines, the capability of European integrated majors to withstand losses from their downstream businesses is being materially impaired in the low crude oil price environment. Stronger margins in the downstream sector in the second half of 2014 due to oil product prices declining more slowly than the fall in crude price partially offset the declines from lower oil prices. However, once prices stabilize, European refining margins are expected to revert back to low levels due to a combination of weak demand growth, spare refining capacity, and strong global competition.

Lower oil prices are impacting Asian LNG prices in different ways. Prevailing contract prices are being impacted because most Asian LNG contracts are linked to oil and spot LNG prices are being affected through fuel switching potential between oil and gas. It is also making marketing of US LNG particularly difficult, with oil indexed LNG now lower than LNG from the US. The oil price drop and resulting decision inertia will also impact new LNG investments. Some of the less commercially attractive projects are being shelved.

(8) Asian Refiners, Chemical Manufacturers, and Coal Suppliers are Benefitting From Lower Oil Prices, but US LNG is Losing Favor

In Asia, low oil prices are continuing to have a ripple effect across the commodity sectors. LNG buyers have lost their appetite for US LNG, at least until oil prices rise. Gas prices are declining, which could help gas challenge coal’s dominance of Asia’s power sector growth. In the coal sector, falling operating costs are benefitting coal suppliers. But, Russian coal imports are gaining a competitive advantage due to Ruble devaluation and lower freight rates. Lower crude prices are having a positive impact on refining margins and the naphtha-based chemicals industry is also benefitting from lower feedstock prices.

The oil price and decision makers’ confidence on where prices will go remains the key issue. Supply levels continue to be maintained in the Middle East and the US onshore revolution continues, but demand remains sluggish so it looks like we may continue to see lower prices than we have been used to for a while. That said, the oil price is sensitive to any tweak of confidence and some commentators think we may be starting to see an upward swing.

Currently, the “State of the Industry” feature note examines what may be missing from the headlines and recent frenzy of speculation surrounding consolidation in the oil and gas sector. One aspect that has so far been overlooked is what this all means for state-owned national oil companies (NOCs). Despite all the excitement about large listed companies getting larger, the NOCs still control the majority of the world’s oil and gas reserves and production. And if the industry is seeing the beginning of a flurry of mergers and acquisitions, these could serve to make the NOCs even larger. Governments will also gain from merger mania in other ways as well, as it may create an opportunity for them to obtain more tax revenue. Lastly and not to be overlooked, governments retain the ability to help or hinder any such mergers and acquisitions transactions through regulatory approval. Ultimately while an increase in mergers and acquisitions activity will create larger international oil companies (IOCs), the benefits reaped by governments owing to increased transactions and NOC growth could be greater.

LIBYA: Export Recovery Will be Short-Lived

Attacks against east-based oil facilities are likely to resume in the next few weeks, disrupting exports and curtailing production. Lately, Islamist militias withdrew from the eastern terminals of Ras Lanuf and Es Sider, which had been under siege for months. While preparing for the reopening of these two export facili¬ties, the non-Islamist authorities have announced they will ask oil buyers to deal with a separate NOC based in the East and to start using a new UAE-based bank account, thus bypassing the Tripoli-based institutions and gaining exclusive access to oil revenues. Although the non-Islamists are unlikely to find regular buyers, they will be able to sell oil sporadically. This will be sufficient to trigger a military reaction by the Islamist camp, which is likely to target oil installations in the east to disrupt exports, possibly by resuming the attacks on Ras Lanuf and Es Sider. As a result, more disruptions to the oil sector are expected over the next few weeks, which are likely to bring exports down to about 250,000 b/d

IRAQ: Service Contracts Unlikely to be Swapped for PSAs

Confronted with a serious fiscal crisis triggered by declining oil revenues, the Iraqi government has decided to renegotiate its contracts with IOCs. The current technical service contracts appear increasingly untenable, as IOCs charge the government a per-barrel fee that does not fluctuate with the price of oil. Baghdad owes oil companies $9b from 2014, and it will need to honor roughly $18b for 2015. The oil ministry is exploring various proposals that would decrease the fixed payments but also provide IOCs with financial upside once oil prices begin to recover. Authorities would face public backlash if any proposals specify foreign ownership of the Iraqi oil. Instead, negotiations are expected to include provisions that would, in substance, resemble some aspects of PSAs, but would prevent IOCs from holding reserve estimates on their books. To pacify nationalist sentiment, the government might also attempt to restore the stakes of its state-run firms in the development projects from 5% to 25%, the original share at the time the contracts were first awarded. However, the negotiations process will remain complicated, as IOCs have to be convinced that the new structure is more profitable over the long run.

Even with the sharp drop in crude oil prices since mid-2014, the number of rigs engaged in drilling in Saudi Arabia has grown in recent years. While Saudi officials have been adamant in recent months that they would not take on a “swing producer” role to balance the market during oversupply, the kingdom still intends to maintain substantial spare capacity. The level of drilling effort required to do this is clearly escalating as mature fields age. Maintaining spare capacity requires investment that does not pay off immediately, but given that increases in Saudi production responding to disruption events or losses from sanctions occur during periods of price escalation, the motivation is not simply to enhance global energy security. The longer-term question is whether and how much the kingdom would invest in expanding capacity. Saudi’s oil minister has stated that capacity could be raised to 15m b/d if necessary, but with other supply coming on line and modest levels of demand growth, that may not be the case. In particular, a reopening of Iran to upstream investment in two to three years could create another low-cost competitor for increases in the overall call on OPEC countries.

Oil and gas CEOs are facing tough market conditions, but CEOs are still working hard to find growth prospects. They’re doing that by getting the most out of technology investments, better utilizing partnerships, and benefiting from diversity strategies. The industry is facing oversupply and lower prices—so it is not surprising that nearly 70% of oil and gas CEOs say their companies are facing more threats to growth than they did three years ago. For oil and gas companies, an increasing tax burden, over-regulation and geopolitical uncertainty top the list, followed by government responses to fiscal deficit and debt burdens, and protectionist tendencies of national governments. Taxes are a particular issue for the sector, which also rates an internationally competitive and efficient tax system as the top outcome it would like to see from government.