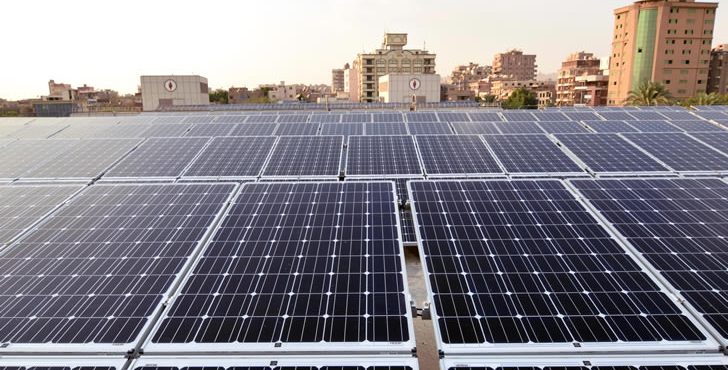 The Gulf Of Suez Petroleum Company (GUPCO) is celebrating its 50th anniversary this year by commemorating its long journey of challenges and achievements.

Established in 1965, GUPCO was a joint venture company between EGPC and AMOCO Egypt Oil Company in an agreement referred to as, “the merged agreement” effective until June 2005. As BP acquired AMOCO’s stake in the company, the agreement was amended to end in December 2024.

GUPCO is currently in the process of upgrading its administrative buildings to be powered by renewable energy. GUPCO is considered to be one of the first oil companies in Egypt to pursue the strategy. GUPCO is pioneering the approach in the industry both to generate electrical power as a cost saving measure, and also to decrease CO2 emissions resulting from generator usage.

Phase One of the project included:

Installation of the first photovoltaic power generation system by Gas Cool. The first system was installed on the roof of the GUPCO administrative building. It now provides 107KW currently online, and was built at a total cost of $233m.

Construction work started on Sep. 7th of 2014, with completed construction and commissioning finished less than three months later in December.

Phase Two of the project included:

Extension of the Photovoltaic power generation system above the GUPCO administrative building’s roof, as well as two executive buildings. The system also provides 107KW when online at a total cost of $229m.

Construction work started on April 5th of this year, and was completed and commissioned 16 weeks later on August 18th.

The project also extended to the EGPC building, as Gas Cool installed a photovoltaic power generation system on that agency’s administration building roof. The new system provides 107KW at total cost of $233m.

At 321KW, the two complexes share the most powerful solar power generation facility on the roof of any administrative building in Egypt.

GUPCO peak photovoltaic generation power is now 214KW, and the average daily production is approximately 1400KW. Annually it will produce approximately 511MW of electricity, which leads to a cost savings of roughly EGP 500,000. This will also assist the nation as Egypt is currently struggling to provide enough electricity for its consumers and industries.

The GUPCO and EGPC staff are also working to further reduce their electricity usage by installing high efficiency light fixtures, and changing them out for LED bulb technology.

As it’s working on further developing its fields, GUPCO is currently drilling three new wells; one exploration and two recompletion. These wells are expected to increase annual production by a further 900,000 barrels of oil, boosting the average with an additional 2,500 b/d.

The Geological Operations team, which supports the SGT, Petrophysics, and Stratigraphy teams, have assisted the Drilling team in the planning and execution of several wells. Amongst them is Edfu A-7, which is a development well targeting the Nezzazate and Nubia formations with an initial production of 1,500 b/d, and estimated reserves about 2m barrels of oil.

Adding 3.2m barrel of oil resources is Hilal B-1, a development well targeting the Kareem and Nukhul formations; in addition to Pre-Miocen Nezzazat and Nubia formations. The initial production of this well was 1,000 b/d from the Nubia and Nezzazat formations.

The development well GS 327-A6st1-A, which targets the Assal reservoir, had an initial production rate of 1200 b/d.

Targeting the remaining hydrocarbon volume in the Belayim and Kareem reservoirs in North Morgan area is the development well M120-153, with an estimated risk weighted reserve at 1.35m barrels of oil. Another well targeting the structural attic of the Belayim and Kareem reservoirs is the Badri-B6Ast1, however this well missed its targets. Nevertheless GUPCO acquired geological data while drilling and had already predicted the targets would be lower than the well estimation.

The development well Hilal B-2, targeting the Kareem, Rudies, and Matulla/Nubia formations adding 1.8m barrels of oil in resources. The initial production of this well was 700 b/d from the upper Rudies formation.

Finally, the exploratory GS277-A5 well, targeting the Belayim and Kareem reservoir, has been completed with initial production 2,300 b/d and estimated reserves about 4m barrels of oil.