Entering a New Period of Uncertainty 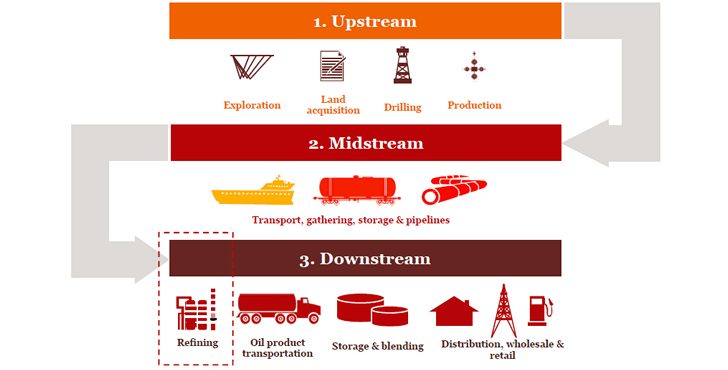 «Upstream» and «downstream» are general business terms referring to a company›s location in the supply chain. The closer to the end user a function or firm is, the further downstream it is said to be. Raw material extraction or production are elements of the supply chain considered to be upstream. The oil and gas supply chain is commonly referenced in this manner. The upstream companies identify oil and natural gas deposits and engage in the extraction of these resources from underground. These firms are often called exploration and production companies. Refiners represent the downstream element of the oil and gas supply chain.

Investments in downstream in emerging markets generally carry higher risks than similar investments in developed countries. Factors related to emerging market operations that can threaten production or profitability for oil companies include infrastructure problems, labor problems and maintenance problems. Along with all the usual risks associated with any investment, operations in emerging markets are subject to specific additional risks. This is particularly true for oil companies, since they typically have large amounts of capital invested in their operations and also because they have to deal with a larger number of issues as compared to some other types of businesses.

One of the major problems for oil companies operating in emerging market nations is the lack of a highly developed infrastructure. Oil companies usually have to fund road, water and electricity access to drilling sites. This can require a much greater expenditure of time and money than it usually does in developed countries. Additionally, infrastructure maintenance tends to be unreliable and less well-established. An additional problem somewhat related to infrastructure problems may arise in the form of difficulties and extra expenses related to acquiring necessary equipment and replacement parts in a timely manner.

Potential labor problems include a lack of skilled workers. Workers may have to be transported over long distances or housed at the operations site.

Legal and regulatory issues can be problematic as well. Oil companies have to negotiate a number of legal contracts and they must deal with government and local regulations. These issues are obviously more difficult to deal with in a country where the company is less familiar with the applicable laws and regulatory requirements. These issues can increase costs or even threaten to shut down operations.

The downstream industry, on the other hand, follows a different business model. It›s not as capital intensive as the upstream industry, and its operations work with variable costs. This kind of industry will surely show a much lower EBITDA (Earnings Before Interests, Tax, and Depreciation & Amortisation). However, operating profits may be just fine. This kind of industry also has another characteristic: it deals with a huge amount of money in transactions, and depends on how you handle these transactions, bottom line numbers can vary a lot.

Retail fuel products are transported to petroleum service stations (i.e. forecourts) where commercial and private vehicles can be fuelled up. Many service stations also have other vehicle services (e.g. car wash, lube change) and convenience stores, food courts to accumulate additional earnings. Stations can be manned (staffed) or unmanned (self-serve).

With the exception of the US Gulf Coast, global refining fundamentals are currently weak

Global: With a couple of exceptions, the global refining industry is living through a sustained period of poor margins. This is driven by demand weakness and a continued supply overhang. On the demand side, sustained gasoline demand contraction in mature economies and weak growth in emerging markets, notably Asia are on-going.   On the supply side, Europe and Asia are struggling to correct overcapacity, whilst the US demand contraction is resulting in increased length. Fundamentals are weak.

US West Coast: Current gasoline and distillate surplus is keeping refining utilisation and margins low. In addition, Canadian crude pipeline permitting delays and a much stronger industry response to the heavy coking margin weakness resulting in slower light tight oil (LTO) penetration than in other parts of the US.

North West Europe: A failure to close sufficient refining capacity is resulting in low margins. Margin downside pressures remain, including demand contraction (due to vehicle efficiency, biofuels and high oil price) as well as competition from imports from advantaged regions (notably Russia, ME and increasingly US).

Asia: Current margins are depressed by refining overcapacity and recent slow demand growth. Demand outlook is not as strong has over the last 10 years. The continued addition of high complexity new refining capacity is likely to result in a sustained capacity overhang

The global refining industry is currently undergoing significant fundamental shifts in both demand and capacity.

Unconventional oil in the US has had a significant impact on US liquids production:

Developing economies are expected to account for all oil product demand growth in the future, offset by falling demand in developed economies in North America & Europe.

Demand for Middle Distillates Is Likely To Drive the Majority Of Growth, Followed By Gasoline And Other Light End Products

Future refinery capacity development is likely to reflect the demand shift from developed to developing regions.