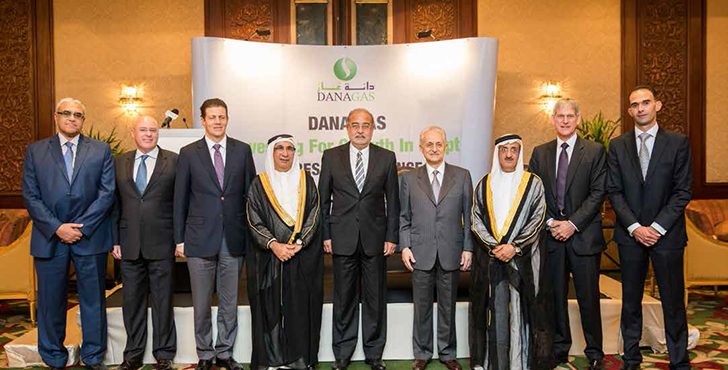 Dr. Patrick Allmann, CEO of Dana Gas, took the microphone providing further details on the matter. He described the event as a momentous day for Dana Gas Egypt, the country’s sixth largest gas producer with a total investment of $1.8 billion in upstream and midstream investments. He explained that the company’s –impressive– track record includes 25 gas discoveries with a 50% success rate in the exploration in the onshore Nile Delta Basin. The company has managed to add 140 million barrels of oil equivalent to Egypt’s reserves, thus doubling Dana Gas’ reserves acquired in 2007. Allman also added that Dana Gas’ total production in Egypt has exceeded 100 million barrels of oil equivalent, a number the company is proud to announce.

Given the company’s successful experience in exploration and their comprehensive understanding for the Nile Delta area, Allman expressed their excitement to announce that Dana Gas has been awarded two exploration blocks in the onshore Nile Delta Basin, Block 1 and Block 3. The blocks, which are adjacent to the company’s current concessions in the area, were awarded as part of the EGAS bidding round for 2014. He also announced that BP is partnering up with Dana Gas on Block 3 with a 50% share, which might prove a challenging mission due to the depth of the Oligocene layer of about 6,000 meters and the high pressure. In the case of this exploration proving commercially viable, BP’s exploration can be extended to cover other Dana gas exploration leases.

Dr. Allman also announced that the strong coordination and cooperation between Dana Gas, EGPC and EGAS has resulted in the signing of a “General Production Enhancement Agreement” (GPEA). According to the agreement, the Emirati company is to drill 37 new wells and complete an equal number of work overs in its existing licenses in the Nile Delta. The investments surrounding the agreed development program are estimated to reach $270 million over seven years, of which $200 million would be invested in the first two years. The capital investment is to be provided for through Dana Gas’ operations and project financing in Egypt. The project is aiming to enhance production by increasing 270 billion cubic feet of natural gas, 8-9 million barrels of condensate and 450,000 tons of petroleum and Liquefied Natural Gas.

Dr. Allman added that the agreement also states “the financial proceeds from all sales at international market prices would be retained by Dana Gas and be used to reduce the company’s outstanding receivable balance until it is fully recovered, which we anticipate in the second half of 2018.”

Dana Gas’ CEO explained that the win-win agreement and innovative project is a testament to the partnership Dana Gas is pursuing between the private and public sector in order to contribute positively to Egypt’s growing energy needs.

The Emirati based company contributes to the development of the local economy by pumping 80% of the company’s investments in Egypt to local suppliers and construction companies. The company also employs 900 Egyptians directly and indirectly in the company’s operations, supporting its success in Egypt, according to Allman.

His Excellency the Minister of Petroleum was the keynote speaker for the event. He expressed that energy is the main engine of growth to achieve Egypt’s economical aspirations. He stressed the importance of secure energy sources, which prevailed in the last few years. Mr. Ismail added that the petroleum sector has succeeded in the last period in maintaining production levels of petroleum products and natural gas, despite the many challenges Egypt has undergone recently. The Minister took the chance to praise and thank neighboring Arab countries for their continued support, singling out the UAE for the unstinting backing. He also expressed his appreciation for the positive cooperation the ministry is seeing from foreign and local private companies, while recognizing Dana Gas for their pronounced contribution. Ismail added that Egypt has plentiful untapped gas potentials in the Mediterranean and the Nile Delta area. He also expressed his optimism in Dana Gas’ recently obtained concessions and the GPEA agreement, as it would add a much-needed amount to the country’s gas production, contributing positively to the country’s economic growth and towards providing for the increasing energy needs.

He also announced that tight formation gas exploration is currently underway in the Western Desert. He explained that the government has agreed with Apache and Shell for the explorations. The first well is currently being tested, he said, for shale gas production in cooperation with Apache and Khalda. Ismail added that offshore exploration, taking place in the Mediterranean, is expected to “pay off” soon, adding to the country’s production. He also explained that the Ministry of Petroleum needs to assure investors that they will receive the return on their investments, in a clear hint to the foreign debts and the government’s efforts to settle them. He added that encouraging more production from foreign companies should work towards the settlement of the government’s debts.

Regarding the prices for the gas from the newly awarded concessions, Ismail stated that negotiations should be held with the foreign partners and an agreement on the prices shall be reached before the start of the production phase. Dr. Patrick Allman stated to Egypt Oil and Gas that Dana Gas is optimistic regarding the potentials of Block 6 in the Mediterranean as well, explaining that the company might need to partner with other major players in the field to tap into the deep water potential in case of successful exploration in the block.