A Smarter Way to Allocate Bread? 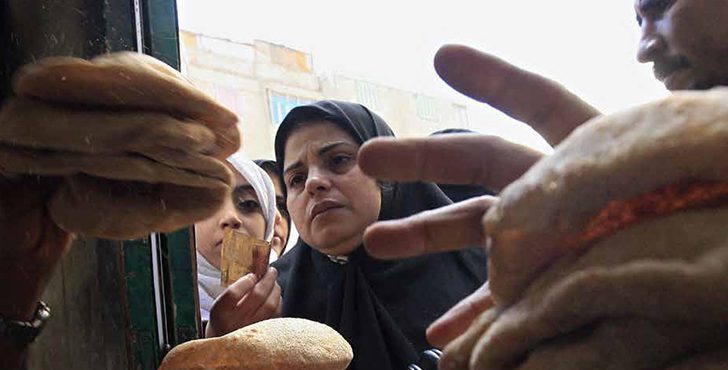 It was early morning and Mahdi Abdisalem, 17, was waiting in line at a state-subsidized bakery in the Nazlt El Smam neighborhood of Giza, a short walk from the pyramids. “It’s an Egyptian routine” he said, “I wake up at 6am, my mother sends me out, and I wait for hours.”

There was a large crowd massed around the counter of the bakery as people clamored to buy cheap baladi bread – the staple diet of Egypt’s poor. At private bakeries the bread costs five times as much. There are frequently shortages and fights break out. Abdisalem says that one man comes to his bakery on a daily basis and takes much more than his allocation. “I can’t bear to see him anymore,” sighed Abdisalem.

The Egyptian government recently announced plans to introduce a smart-card to ration subsidized bread in Egypt; they hope that the scheme will help fight corruption and save waste, allowing the government to reduce bread subsidies which account for $3.15 billion a year of Egypt’s chastened budget, according to the Wall Street Journal. The smart-card system was piloted in Ismailia, Port Said, and Suez in January 2013. Mada Masr reported that the Egyptian government recently announced that it would be extended to some areas of Cairo in July and across all governorates in Egypt “during the next few months.”

Khaled Hanafi, Minister of Supply and Internal Trade, has praised the scheme and claimed that the pilots succeeded in reducing consumption by 30%, said Al Ahram newspaper, which in turn has reduced subsidies.

The government’s previous policy over several decades was to provide bakeries with subsidized flour, which bakers used to make 5 piaster loaves. The scope for corruption was wide as the sales were largely unmonitored and there was no effective rationing system in place to allocate resources fairly. The new scheme will subsidize the bread itself, rather than the flour, and will track the sales electronically – which the government hopes will reduce theft and the black market sales.

People who are eligible for the subsidized bread will receive an allocation of 150 loaves a month. The government hopes that this will address waste and prevent people from buying huge quantities of bread. If someone doesn’t use all their allocation of bread, they receive 10 piasters credit per loaf, which can used to purchase other goods provided by the government such as oil and sugar.

Some analysts have also claimed that the new system will encourage competition amongst bakeries, which will drive up the quality of the produce, reported Al Ahram in June.

Although the scheme is ambitious and tackles some longstanding flaws with the bread subsidies system, some analysts have misgivings and concerns about some aspects of the system.

The pilot system was small in scale and may not present an accurate indication of how effective it will be in a widespread system introduced across Egypt.

The new scheme may also provide new opportunities for corruption. Writing in Mada Masr, Isabel Esterman argues that the pilot project seems to show that the system can result in a better service, but that it also proves the need for institutional change. “The weakness of the program lies in the fact that it is administered by the same bakers, inspectors and officials that often profited handsomely from corrupt practices under the old system, and who will doubtless be looking for ways to maintain their flows of illicit funds,” writes Esterman.

Karima Korayem, Professor of Economics at Al Azhar University and consultant to the UN’s World Food Program, worries that those who most need subsidized bread could be excluded by the smart-cards by bureaucracy.

The new smart-card system requires consumers to register for ration cards and collect smart-cards using national identity cards for adults and birth certificates for children. Korayem says that some members of the “ultra-poor” have previously been unable to get ration cards because they don’t have the necessary papers; until now, those unable to get ration cards have been able to receive bread because of the informality of the system, but have been unable to claim other subsidized products such as cooking oil, sugar, and rice.

“If you are going to make the smart-card system for the baladi bread, first try to reach those [who need it],” says Korayem.

Korayem argues that wider reform of the rationing system is necessary because many wealthier people receive ration cards for subsidized products that they don’t need. Research by Korayem found that around 19% of bread in urban areas and 36% in rural areas are misallocated and wasted. “They must make this differentiation,” says Korayem, referring to the need to identify those who are genuinely in need. “They must allocate [resources] to the ultra-poor.”

According to a report in Al Ahram, the weight of the allocated bread will be reduced from 130 grams to 90 grams. As the price of the bread remains the same, it amounts to a cut in allocation in real terms. This could have a detrimental effect on some poorer, larger families.

In the short-term the subsidies allocated to bread have actually increased, according to a report in Daily News Egypt. The state’s budget for subsidized bread has risen to EGP 24 billion in the new fiscal year, up from EGP 22 billion in the previous budget.

Fakhry El-Fekky, quoted in an article by Daily News Egypt, says that the budget allocation for bread subsidies has increased to provide funds to import wheat and address the issue of smuggling flour. Some analysts have suggested that Egypt needs to raise the levels of its own wheat production in order to comprehensively tackle the issue of bread.

Egypt is currently the world’s largest importer of wheat – much of which is used to make baladi bread to feed Egypt’s poor – using up a significant amount of the country’s foreign reserves as much of the wheat is bought on the international market in US dollars. Egypt currently produces around 55% of its own wheat consumption and many analysts believe that Egypt can raise wheat production to 70%.

“In the last two years production of wheat has increased because the government raised the price it pays to the producers and the farmer is superb at responding,” says Adel Beshai, Professor of Economics at the American University in Cairo. “We also produce a huge amount of corn in the summer and this year the output will be big so the production side is good. People who talk about self-sufficiency are ignoramuses – to produce 70% is more than OK.”

Beshai says that the government has to be careful not to overtax farmers and that the “government needs to make sure that it announces prices for corn and wheat in good time and offer good prices…next, the whole marketing system of agriculture needs to be looked into because although you have massive number of producers, the wholesale buyers are few and are oligopolistic.”

If the smart-card system is able to reduce waste and activity on the black-market by tracking the sales of flour and bread, then the impact of any increase in wheat productivity could potentially be further enhanced.

Bread is a political issue in Egypt and any attempts to reform the allocation the stomach-filler of the poor is fraught with pitfalls, as previous rulers have discovered. President Anwar Sadat faced major riots when he attempted to cut bread subsidies in 1977. Under Mubarak, the rising price of wheat created shortages in 2008 and provoked unrest. The widespread slogan used by protesters who ousted Mubarak in 2011 was ‘bread, freedom, and social justice’.

Jim Krane, Wallace S. Wilson Fellow for Energy Studies at Rice University’s Baker Institute for Public Policy, says that there may be a link between bread riots and democratic concessions. “The idea being that democracy and patronage are substitutes, and when patronage spending is unavailable, regimes respond with democratic openings (otherwise they increase repression)…Bread riots tend to be viewed as ‘taxpayer revolts’ in the culture of the Middle East, since income taxes are generally nonexistent, and a decrease in government subsidy thus has the same effect on personal incomes.”

Egypt is experiencing a continuing economic crisis characterized by corruption, a widening budget deficit, sluggish growth, soaring prices, energy shortages, high unemployment and entrenched poverty. If the smart-card worsens the well-being of many poor Egyptians, unrest is likely to follow.

Recently-elected President Abdel Fattah El-Sisi will also have to balance the unpredictable impact of reforming bread allocation, alongside the impact of reducing costly energy subsidies. In discussing bread subsidies, many analysts have agreed that they need to be reduced but argue that it is energy subsidies that seriously undermine Egypt’s economy. “I am not worried about subsidizing the Egyptians when it comes to bread” says Beshai, “I am worried about the energy subsidy on which a lot must be done and can be done and it is long overdue.”

Energy subsidies will account for as much as $19 billion in the next fiscal year reported the Guardian. A surprise 78% rise in fuel prices earlier this month prompted protests by taxi and micro-bus drivers. A wider austerity program is also likely to increase the pressure on impoverished and struggling Egyptians. According to Mada Masr, with inflation at 9.1%, many ordinary Egyptians are struggling and the average Egyptian family now spends 40% of their income on food.

Given these pressures, the reform of bread subsidies carries substantial risks. It will require a deft touch from a bureaucratic system that is notorious for being heavy-handed.